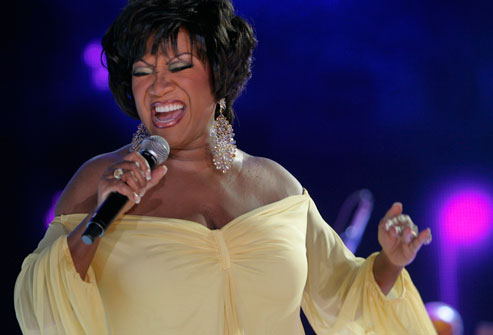 What a day! And a night! Around 9pm, Naomi Campbell, looking elegant and sophisticated in a stunning black dress, told me she was going to an even bigger charity event in Cannes next May than she did this year. She’d just spoken on  the stage at Denise Rich‘s Angel Ball at Cipriani downtown, to a crowd that included famed singer Natalie Cole, rapper Eve, R&B singers Estelle and Anthony Hamilton (http://www.anthonyhamilton.com), model Estelle Warren, actor Mark Linn Baker, plus Clive Davis, Nikki Haskell, designer Tommy Hilfiger and his beautiful wife Dee, Lorraine Bracco, Kyle Maclachlan, Google’s Eric Schmidt, Russell Simmons (who said he’s been down to Zuccotti Park every day),  Nancy (the ex Mrs, Les) Moonves, art dealer Tony Shafrazi, Pantone creator Larry Herbert and his dancing, charitable wife Michelle, plus Naomi’s Russian billionaire boyfriend Vlad Doronin and hundreds of very wealthy, formally dressed, extremely generous and Botoxed New Yorkers. Patti Labelle sang “Over the Rainbow,” Nile Rodgers and Chic performed “Le Freak” and “Good Times,” the inexplicably famous Kim Kardashian swanned around the room for no reason, and everyone ate delicious lamb chops. The crowd also got Romero Britto designed gift bags filled with makeup, shampoo and rich cookies. Denise, who’s been doing this since around 1999, raised even more millions for cancer research, which she does very well…

…Earlier in the day, at the Pierre Hotel ballroom, the Center for Communications: I sat at lunch next to legendary comedian Jackie Mason, who critiqued Joan Rivers as she presented an award to much liked AMC president and CEO Josh Sapan. “She’s very funny,” Jackie said. “But she tries to get free tickets to my shows. I won’t give them to her. I don’t even know her.” Didn’t they pal around during the Ed Sullivan years, I asked? Jackie, who seems basically the same as he did 10, 20, 30, and 40 years ago, said, “No.”What did he think of her plastic surgery? “What’s the difference?” he said. “It’s not about that.”

“Saturday Night Live” star Fred Armisen preceded Joan, but kept it simple, short, and straight. No jokes, really. Joan was hilarious, of course, lampooning her own show on the WE network, which falls under Sapan’s purview. Jackie, by the way, is trying to bring a new one man show to Broadway this winter. Does have it a title? “No, who cares? It’s me. That’s all people care about.” Actually, I found it kind of soothing to have Mason’s voice burbling next to me. It’s like eating a knish after a long time and really liking it.