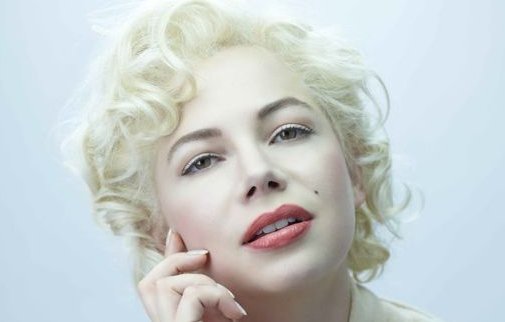 It won’t be in theaters for a few weeks, but “My Week with Marilyn” premiered last night at the New York Film Festival and put Michelle Williams in the lead for Best Actress. Williams creates Marilyn Monroe instead of imitating her, bringing this 90 minute or so memoir to life in unexpected ways. Indeed, the director Simon Curtis has done a remarkable job of fashioning Colin Clark‘s 1995 book, “The Prince, the Showgirl and Me” into a charming snapshot of the period Marilyn Monroe spent in London filming with Sir Laurence Olivier’s “The Prince and the Showgirl.”

Of course, this took place before Marilyn got embroiled with the Kennedys. She was unhappily married to playwright Arthur Miller and already boozing it up and taking pills. She was never on time to a movie set, and was under the watchful eye of Paula Strasberg, wife of famed acting teacher Lee Strasberg. Monroe, Paula, Milton Greene, and her publicist Arthur Jacobs. They are played, respectively and brilliantly, by Zoe Wanamaker (Paula), Dominic Cooper (Greene), and Toby Young (Jacobs).

Rounding out the cast are Kenneth Branagh as Olivier in an Oscar worthy performance, and the perpetually magnificent Judi Dench as actress Sybil Thorndike. Finally there’s Eddie Redmayne, dewy eyed and totally convincing as young Colin who falls in love with Monroe during the short time he’s assigned to watch her for the production. Emma Watson, of “Harry Potter” fame, has a small but convincing role as the girl Colin (Eddie) toys with while the movie is being made.

The production is lavish and beautifully shot, so that adds to the project’s attributes. But it’s the acting and the script that carry the day for “Marilyn.” This could have turned out to be a cable movie, with the actors all overdoing it. But Curtis has pulled something interesting off here: it’s a slight story, and we know it. Marilyn boozing and not showing up for work. She was the Lindsay Lohan of her day. But Curtis has managed to assemble all the ingredients in unique ways. Michelle Williams doesn’t pretend to be Marilyn Monroe. She simply creates her own Marilyn, the way Philip Seymour Hoffman invented Truman Capote, or Cate Blanchett made up Katharine Hepburn.

Williams is luminous and vulnerable. But she also plays Marilyn as a woman who knows what she’s doing. She isn’t a victim. Indeed, this Marilyn is a little bit of a manipulator. Williams gives her an edge that lifts Marilyn off the list of Dead Famous Stars and makes her human. And she sings–Williams shows off a convincing voice–not a “Mr. President” whisper but Marilyn’s real singing voice–another reason Academy voters will embrace her.

The script gives the supporting characters a lot of opportunities. Zoe Wanamaker makes the most of this with her Paula Strasberg. The Strasbergs took Marilyn under their wings and would not let go. Wanamaker has the smothering, passive aggressive Paula just so right that it doesn’t even matter if it’s true. Williams’ Marilyn is happy to have her Rasputins in Lee and Paula. Then: Branagh is the heart and soul of the film as Olivier. It’s his best performance ever on screen. At last he seems ready not to condescend to the audience. He’s just great. And Julia Ormond is more than endearing as Olivier’s then wife, Vivien Leigh.

A few pals showed up last night to support Williams and Redmayne, like Paul Dano and Zoe Kazan, and Jake Gyllenhaal. Curtis is married to American actress Elizabeth McGovern, and it’s always great to see her. But mainly there’s a lot to think about with “My Week with Marilyn.” The fawning over Monroe, her lack of self esteem and self confidence, the efforts of her sycophants to cover her addictions and illness–this took place in 1957, and it’s still happening now all the time.