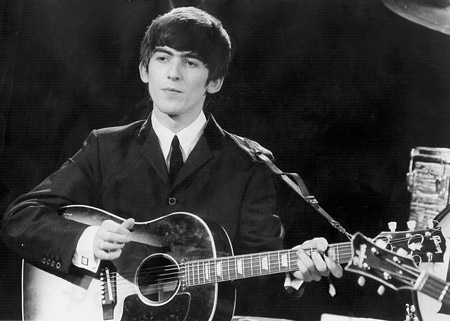 The two part, four hour Martin Scorsese documentary, “George Harrison: Living in the Material World” is a big meal, almost an encyclopedia of the late and beloved Beatle. The first part, airing tonight on HBO, is a good catch up with lots of home movies and clips–some of which we’ve seen, but placed in this context are exciting to revisit. Tonight’s show is all about the Beatles, George’s early life, and his growth as a songwriter, performer, and spiritual being.

The second part, on tomorrow night, is the gold mine though. This part addresses Harrison’s battle with cancer, the attack by a psychotic intruder inside his estate, and his 30 year marriage to Olivia Harrison. I always say, and say this again, everyone should have a widow like Olivia Harrison. She has done an amazing job of tending George’s memory. It’s her honesty and forthrightness that drives “Living in the Material World.” There is no sense of rewriting history or manipulating the facts. Working with Scorsese’s team, Olivia has produced a lasting historical document about George Harrison that he’d be proud of.

Some highlights and thoughts: Paul McCartney is the most at ease and unguarded I have ever seen him in interviews here. He credits George for making “And I Love Her” into a classic record. “You hear that part he added at the beginning,” McCartney says. “I didn’t write that.” That’s a stunning moment for McCartney. There are other, terrific interviews, with race car driver Jackie Stewart, percussionist Ray Cooper, Eric Idle, the late Billy Preston, George Martin, and Eric Clapton and his (and George’s) ex wife, Patti Boyd. Ringo Starr also gives a great interview and does himself a service when describing how he came up with the drum part for “Here Comes the Sun.” It goes to show why Ringo is such an amazing and underrated musician who should be in the Rock and Roll Hall of Fame on his own.

A lot of “Living in the Material World” is unfocused, so be warned you must pay attention. Along the way there are gold nuggets like a rare version of George singing the standard,  “Let it Be Me.” There’s also a fun section on the Traveling Wilburys with the likeable Tom Petty talking about ukeleles. The movie is long, so I’m not sure if I ever heard a reference to Joe Brown, Harrison’s old musician friend. I suppose you can’t have everything. Even in four hours a lot is omitted to speed things along. There’s a big discussion of “My Sweet Lord” but no reference to the whole plagiarism case that ensued. This is funny because Phil Spector–filmed in 2008 and looking like Mike Myers’ Linda Richman from “Coffee Talk”–says he knew “My Sweet Lord” would be a hit when he heard it. That’s because it sounded so much like “He’s So Fine” by the Chiffons, a Spector-era hit.

But mostly Scorsese and Olivia Harrison achieve what they set out to do: present the spiritual George Harrison, the big picture, the inner man. By the time you tough out four hours, you realize it was well worth it. And the movie ends as it began, on a poignant note that may cause if not gentle weeping, certainly a few tears for this unsung hero of rock music and pop culture.

Here’s one of my favorite George Harrison songs: http://www.youtube.com/watch?v=9D9JuiJNizw