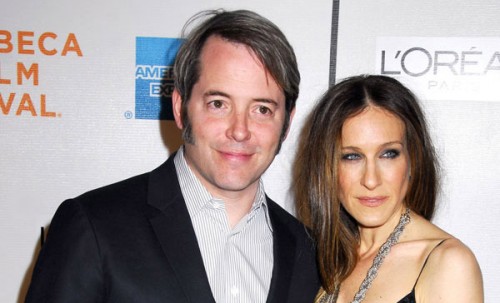 Sarah Jessica Parker and Matthew Broderick learned a lot about dinosaurs last night. So did about 200 people who came to the American Museum of Natural History to support Mike Nichols and Cynthia O’Neal‘s 20 year old charity, Friends in Deed. Legendary composer Stephen Sondheim created a treasure hunt game with the museum folks, and he was there to watch as all of us scurried through the various dino halls to figure out answers to things like “parrot beak” and “giant sloth.” Once you found the appropriate fossil and filled in the blanks of its name on clue cards, the answers were then drafted down to a single sentence. Team Number 8–with writer Patti Bosworth, Broadway legend Phyllis Newman, and man about town Joe Armstrong–kept colliding with Team 4– SJP, Broadway star John Benjamin Hickey, and Bravo’s Andy Cohen. Phyllis Newman, luckily, goes back a long way with Sondheim so she knew how to play the game. She guessed the answer early, but everyone was too excited to pay attention. The winning team got to take home a Motorola Xoom tablet. Later everyone dined in the Planetarium and listened to songs from Broadway stars Melissa Errico (who has a new album coming out next week produced by Phil Ramone) and Raul Esparza.