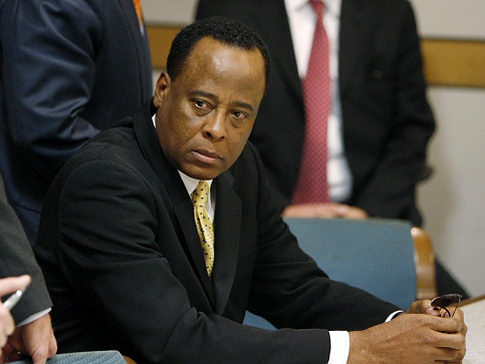 I wrote this on July 23, 2009 in this column. But it seemed appropriate to recall in light of the current trial.

Michael Jackson’s Dr. Conrad Murray, now under investigation by the LAPD for possible manslaughter in Michael’s death: medical malfeasance may be in his genes.

Dr. Murray’s biological father, whom he met at age 25, was the late Dr. Rawle Andrews of Houston, Tex. Dr. Andrews died in 2001, but was a respected Houston physician. Both Dr. Andrews and his son, Dr. Murray, are graduates of Nashville’s Meharry Medical College.

However: Dr. Rawle Andrews medical license came under review and was ‘severely limited’ according to the Texas Medical Board, from 1994 to 1999.

The board particularly cited four “dangerous” drugs in their order:

Nubain–another powerful pain reliever, delivered through IV, equivalent to morphine and used as a supplement to anesthesia;”

Phenergan — a more moderate pain killer but also an antihistamine used for itching and swelling.

If any of these turn up in Michael Jackson’s toxicology report, the parallels may be more than just a coincidence. What probably killed Jackson was an overdose or misuse of anesthesia-based drug Diprivan. Certainly, Dr. Murray knew that his father had had disciplinary action taken against him for prescribing and administering similar drugs.