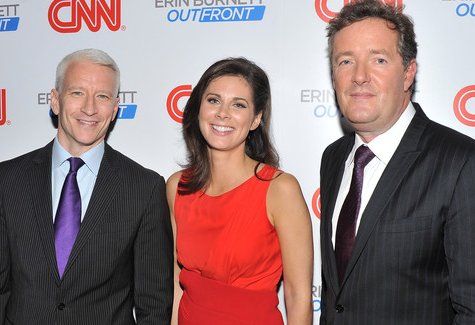 Erin Burnett is about to take over CNN’s 7pm spot, and everyone is happy about it. On Tuesday night, the top brass from CNN tossed Erin quite a lovely pre-debut gala at Robert restaurant on Columbus Circle that was so packed with important peeps that it was almost frightening. My favorite moment: talking to Daily News publisher Mort Zuckerman and journalist Judith Miller, when all of a sudden a man arrived bringing Zuckerman a glass of liquid refreshment from the bar. It was none other than JP Morgan chief Jamie Dimon, who’d volunteered to snake through the packed room and return with beverages. How incredibly helpful!

And then Time Magazine’s John Huey and CNN’s Greg D’Alba were chatting, while Anderson Cooper, Erin Moriarty, ABC News’s Bill Blakemore, and Dan Abrams were all milling about. CNN was represented by chiefs Ken Jautz and Mark Whitaker, who greeted veteran White House reporter Bob Jamiesen, Connie Chung and Maury Povich, Gerry Byrne, Jill Brooke, Jami Floyd, Bonnie Fuller, CNN.com’s Susan Grant, Joy Behar and Piers Morgan. There was much talk about how well CNN is doing, beating MSNBC and finally gathering a head of steam under its new regime– a relief after a couple of years of reorganization.

Erin Burnett, by the way, is smart — and fun. Her show may indeed by the lynchpin CNN needed now that their other shows–Cooper’s 360, Piers Morgan etc–have all fallen into place.

PS Network news correspondents don’t always get a lot of attention. But I really loved meeting Bill Blakemore, who’s been at ABC a long, long time doing great features. It turns out he’s a big of Stanley Kubrick and is something of a Shakespeare fan. Who knew?