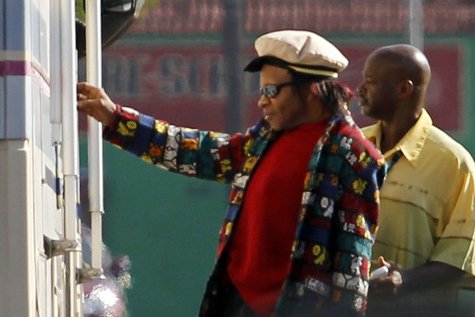 Rock icon Sly Stone is NOT homeless even though he’s living in a van. The New York Post story that’s caused such a sensation was paid for by the writer of the piece. I can tell you both of these truths are according to a source close to Stone. This isn’t to say that Sly–real name Sylvester Stewart–isn’t in perilous financial shape. It’s also not to say that his $50 million lawsuit against former manager Jerry Goldstein isn’t valid. I’ve been writing about Goldstein’s abuse of Stone for years–I wrote about it in the New York Post at least 15 years ago.

And Goldstein is famous for his financial problems with former clients–the group War is primary among them. But just to clarify–Sly is living in that van by his own choice. My source says that Sly’s attorney, Robert Alan, rented him a very nice home in Woodland Hills, California with four bedrooms, a pool, etc. (Alan declined to comment.) Sly just refuses to go there. Another friend tells me, “Sly always liked living in Winnebagos. He never liked being in a house.”

Indeed, Stone is going to look at a couple of new vans this week, I’m told. And it’s not like he’s living in a beat up panel van. His accommodations are fine for what they are. “He’s too paranoid to come inside,” says a friend. This is the result of 40 years of drug abuse.

But this is the way Stone has operated for more than 25 years–sell anything for quick cash.

There’s so much more about his lawsuit against Goldstein that will come to light soon. Once depositions are completed, and a trial date is set, things will get very interesting.