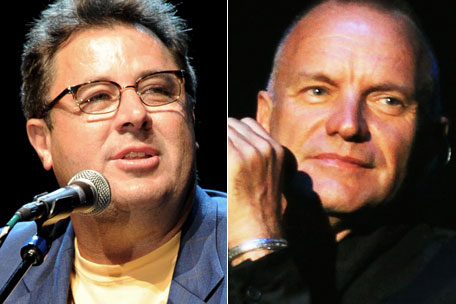 Country star Vince Gill and rock star Sting teamed up at the Hammerstein Ballroom last night to help CMT Crossroads celebrate its 10th anniversary in a big way. It was the first New York taping in five years for the cable country video network’s program, which teams country artists with those of other genres in illustrating the far-reaching roots of country music–and usually tapes in Nashville. The show airs November 25th.

This “Crossroads” was one of the toughtest tickets for those lucky enough to attend. But while previous stellar pairings like John Fogerty and Keith Urban and John Mellencamp and Kenny Chesney may have made more sense from the country music roots standpoint, that surely didn’t bother anyone present.

Any advantage Gill might have had in being the CMT property was likely offset by Sting’s being an Englishman in New York, as Hammerstein’s appeared to be as much a Sting crowd, at least, as Gill’s. “I always wanted to be rock star– but couldn’t fit into spandex,” joked Gill, alluding to his heavyweight tendancies, though he looked slimmed-down casual and kind of bookish in short hair and glasses, jeans and plaid shirt with tails sticking out.

Sting was more formal in basic black, and the color scheme gave a good graphic representation in the differences of their music and presentation: Gill is a livelier player and composer, easily alternating from his songs to Sting’s as the show’s format dictated. Prefacing the duo’s cover of The Everly Brothers’ “Let It Be Me,” he said that they were taking their act on the road as “The Self-Righteous Brothers.”

“Let It Be Me” was also the one song where the two split the vocal duties in half, each standing tall at their mic stand and singing without playing. Otherwise, one would take the lead on the other’s hit, then trade places, with Sting starting the night off with Gill’s “Liza Jane,” Gill following with Sting’s “Fields Of Gold” after reverently noting how the beloved late pop songstress Eva Cassidy recorded it before she died.

Sting singled out Gill’s “Whenever You Come Around” as a song that “speaks to me,” after pointing out the difficulty in deciding which Gill song to sing. The performance was marked by a beautiful Gill guitar solo; Sting didn’t play on this one, but on others he played harmonica and acoustic guitar in addition to bass. The nine-piece backing band, incidentally, was Gill’s, and had no trouble moving back-and-forth between its leader’s material and Sting’s.

“The great thing about a show like this is we get to sing out of our comfort zone,” said Gill, leading into Sting’s “If I Ever Lose My Faith In You,” the only song in the rapid nine-song, 40-minute taping–which was followed by only one retake–that didn’t quite jell. But it ended big with “Every Breath You Take,” which brought everyone to their feet and whistling.

“Thanks for doing this buddy!” Gill said to Sting afterwards.