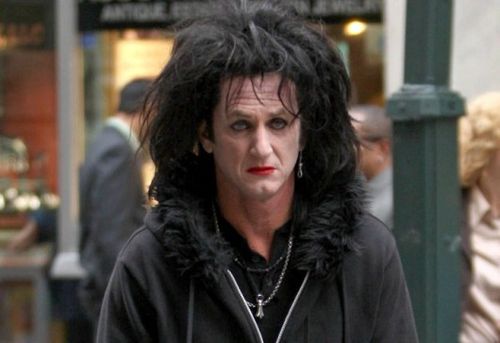 “This Must Be the Place,” an odd movie by Paolo Sorrentino, has gone to the Weinstein Company. Sean Penn has a kind of grand performance,but the movie is very weird and doesn’t quite work. I told you on May 20th that TWC was interested in it, But then nothing happened. See this link: http://www.showbiz411.com/2011/05/20/sean-penn-ryan-gosling-take-center-stage-at-cannes

Penn plays a retired 80s rocker who looks sort of like The Cure’s Robert Smith. He lives in an Irish castle with his idiosyncratic wife (Frances McDormand) and makes friends with a young woman who is played by Bono’s real life daughter. Penn talks in a high voice like Michael Jackson. Then it turns out his father, a Holocaust survivor, is dying in Brooklyn. So he goes to Brooklyn, where everyone is Orthodox and davenning (praying). He decides to go on a Nazi hunt and find the man who tortured his father in the camps–the man lives out west. Along the way, because he drives– looking like Robert Smith meets Ozzy Osbourne–he runs into David Byrne, who puts on an electrifying performance of his Talking Heads song, “This Must Be The Place.”

For some reason, TWC wants to be in business with Madonna and with Sean Penn. Is it 1992? What’s next, a remake of “Shanghai Surprise”? I don’t know what people will make of this movie, which we saw at Cannes. Maybe there’s a Holocaust-Talking Heads-Ozzy Osbourne demographic.