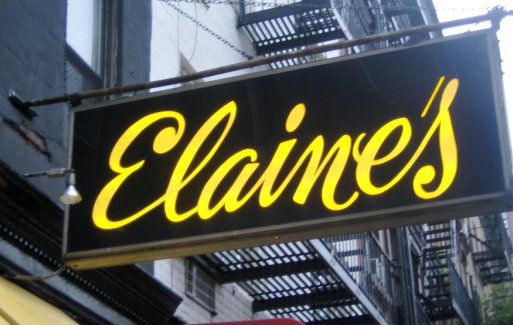 The action at Doyle’s on Tuesday afternoon was the auction of memorabilia and personal items from the late Elaine Kaufman and her 47 year old landmark upper East Side restaurant, Elaine’s. By the time the last gavel fell, about $385,000 had been collected from fans and friends, a few outsiders, and some professionals who used phones and the internet.(We underestimated originally at $307.000, because we excluded the auction house’s premium.)

Dispersed now into the wind are the papier mache carousel horse that hung in the window, the old manual cash register, photographs of the rich and famous, noteworthy art work, and Table Number 1, which went for $7,000.With the premium it came to $8,750 according to Doyle’s.

Your truly was able to pick up a baseball from the 1978 World Series which George Steinbrenner inscribed to Elaine “I love you.” Bar stools, personal jewelry, a sign from the old subway system that read “No Passengers,” all of it went in an auction that took just under four hours. The narrow room at Doyle’s opened onto the street, and was packed from start to finish. But the last ninety minutes was kind of cool, with just the regulars taking the seats and bidding for items that had personal significance. Among the pieces now in the hands of Elaine’s friends: A Woody Allen signed poster of “Play it Again, Sam”; a Bert Stern photograph of Marilyn Monroe; and a drawing of George Plimpton.