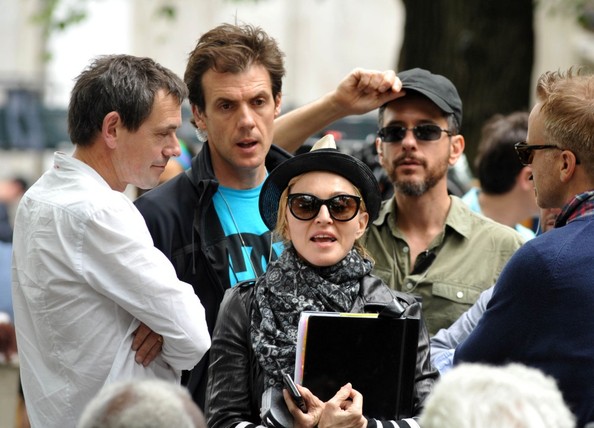 Madonna does not want us to review her, but to review her movie, “W.E.” It’s not easy. In Madonna’s world, everything is about her. You want to call the movie, her fantasy about the Duke and Duchess of Windsor, “M.E.” Up here in Toronto, the screening and premiere of the film have caused a lot of agita. First, few people showed up for the press screening. It was very odd. Had the bad press from Venice really turned people off? Or was it that the movie had been pre-screened for the Canadian press? There’s no way of knowing.

Then the big movie premiere last night: Madonna brings only the two female leads. The men are nowhere to be found because apparently she didn’t get along with them. She made some nice remarks, but forgets to mention the film company that has brought her here. On the other hand, she doesn’t seem perturbed that one of her star actresses, Andrea Riseborough, shines from the stage of Roy Thomson Hall like a real Hollywood legend in a glittery black and silver Dolce and Gabbana dress.

And there’s this whole history thing: is “W.E.” supposed to be accurate? Or Madonna’s interpretation of history? I’ve spent the whole day listening to different rationalizations. “W.E.” is like a gauzy “Wonder Years” version of the story of “the greatest romance in history.” Very little of it is connected to what we used to call “facts.” Apparently, facts don’t matter. This is Madonna’s take on what she thinks really should have happened.

So let’s set that aside. The movie looks great. It’s beautifully edited and composed. The cinematography is unusual, and striking. Madonna knows style. She’s made hundreds of videos, and has learned from that experience. Even though it’s incredibly chaste–no sex, really–“W.E.” moves. It doesn’t linger. Riseborough is perfection as Wallis Simpson, the ambitious, engimatic, hated commoner who got the King of England to abdicate his throne. She’s the original Yoko Ono. With her pearls and pasted down flapper hair style, Riseborough is so captivating that Simpson’s infamous infelicities can be set aside.

There are two unusual moments– and I wish there had been more of them. Early in the couple’s party throwing, the whole decadent gang dances to the Sex Pistols’ “Pretty Vacant.” Madonna chose the song for a reason. These people are really vacuous, all of them. She knows it. And in that scene she finally admits what “The King’s Speech” and history chronicled: the Duke and Duchess of Windsor were nitwits.

At the end of the movie, Simpson dances to Chubby Checker’s “The Twist” as the Duke lays dying in his hospital bed attached to an oxygen mask. He’s asked her to “dance for me.” But it seems like a spit in the face more than a tribute. And Madonna knows that Simpson had come to hate the former king, the fabled romance long over. Their gilded cage had become a prison.

“W.E.” has been called a big screen shopping spree. It’s certainly a close up parade of expensive objects, the people included. I think the best way to enjoy it is as fiction. The Duke and Duchess were terrible people: Nazi sympathizers, totally self involved. The world was lucky to be rid of them. But who wants to hear that story? Madonna has instead captured their decadence and their isolation. She’s also shown her keen eye for detail. Her next movie–because there will be one–should be drawn entirely from fiction, I think. When her imagination can run wild, untethered to facts, her films will be judged entirely on their own.