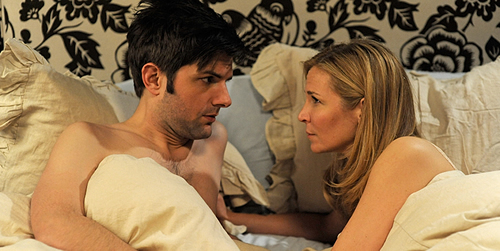 For the last few years, Jennifer Westfeldt has been tagged as the girlfriend of Jon Hamm. Ever since “Mad Men” hit it big, Westfeldt–who had starred in and wrote “Kissing Jessica Stein”–sort of got lost in the mix. No more. She’s directed “Friends with Kids” from her own screenplay, and stars in this top notch, moving romantic comedy. The movie has just blown away everyone who’s seen it this weekend. Hamm can now be known as Westfeldt’s boyfriend.

“Friends with Kids” also finally elevates the very talented Adam Scott from sideman to main player. He and Jennifer play long time friends who are not attracted to each other but feel like they should have a child. All their friends have married and have kids with varying degrees of success. Hamm and Kristen Wiig play one couple; Maya Rudolph and  Chris O’Dowd are the other. Brian D’Arcy James has a cameo appearance, too.

The baby is born, and into Westfeldt’s and Scott’s lives come, respectively, Ed Burn and Megan Fox as new loves. It’s all so socially progressive, at least for a while. And then things go very wrong.

The plot of “Friends with Kids” is not new. I think many people here in Toronto had a feeling they were walking into something they’d seen before. Surprise! The movie is fresh, and resonates with new observations, well drawn characters, and deep emotions. It’s a descendant of Woody Allen and Nora Ephron, but quite wonderful in ways that it updates conventional concepts. “Friends with Kids” is a total winner, and Westfeldt–who could be Lisa Kudrow’s long lost twin–is again an overnight sensation.

PS This is my favorite kind of New York movie. Jobs are never issued or discussed. Everyone has loads of money and great places to live in. They also have great clothes and personal stylists. Life is but a dream.