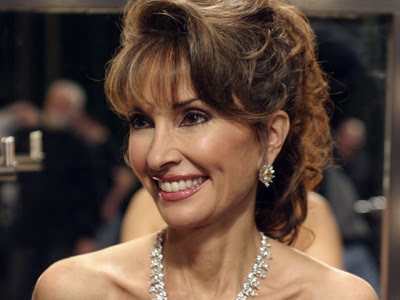 Susan Lucci doesn’t get a lot of respect because people don’t know her. But Susan is fun and tough. She’s soldiered through 41 years of “All My Children” with ABC Daytime. She’s finally speaking out against them now that the show has finished taping. On Saturday morning in Page Six, Lucci released the chapter she’s added to her memoir, “All My Life.” being republished ten days before the show goes off the air.

Lucci socks it to Brian Frons, the miserable exec who destroyed ABC’s line up of soap operas to be replaced by junk talk and reality programming. Lucci finally blames Frons for moving the show to Los Angeles, getting rid of creator Agnes Nixon, and conspiring to kill AMC and OLTL. She told him: “I think our being in this position is the result of some very bad decisions by you.”

Lucci writes, “An iconic show was losing out to greed … If Brian Frons could show his bosses that he could save the network 40 percent … he could keep his job even if the rest of us lost ours.” She continues, “I watched Brian Frons’ decisions destroy the production of our show and the lives of people on both sides of the country.”

Lucci also writes in her addendum, according to Page Six, that Frons appeared “self-congratulatory” delivering the bad news to the cast, and he “has what, for me, is that fatal combination of ignorance and arrogance,” adding, “I cannot fathom any network executive choosing to alienate millions of loyal viewers in these economic times.”

It wasn’t easy for Susan, and she had to wait until she was done with ABC to speak out. Robin Strasser got the boot from “One Life to Live” from ABC and Frons for speaking her mind this spring. Her 30 year run on the show ended abruptly last week, months before that show goes off the air. Soap actors are scared to speak in public because they can be written out of their shows almost instantly. Their contracts guarantee them nothing.

This is why we haven’t heard from multiple Emmy winner Erika Slezak, who’s starred in “One Life” since 1971. But it would be great to get her voice in this discussion. “One Life” has seen a huge ratings increase this summer, and is now doing better than ever.