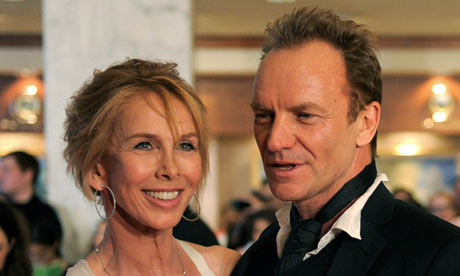 Sting is celebrating his 60th birthday in a big way–and not just with a gorgeous box set of his solo music due on September 27th. Coinciding with his 25th anniversary as a solo artist, the menschy activist singer is putting on all star concert at the Beacon Theater on October 1st. The show proceeds will go straight to the Robin Hood Foundation, too.

Guests include Stevie Wonder, Bruce Springsteen, Billy Joel, Herbie Hancock, Mary J. Blige, Chris Botti and the ubiquitous Lady Gaga. All of Sting’s longtime players will be featured, too, including the great Dominic Miller. Tickets are not being sold to the public, but a limited number are being made available to fan club members through sting.com.

Meantime, not to be outdone, Trudie Styler aka Mrs. Sting is appearing all this week at Scotland’s Edinburgh Fringe Festival in “A Dish of Tea with Doctor Johnson.” Then the play–for which Styler and cast have won raves–returns for a three week run in London’s West End. Bravo! Oh yes, she’s also producing the currently filming “Imogene” with Kristen Wiig. This column reported on that film first back in mid June, by the way.

PS If you haven’t read Sting’s 2003 memoir, “Broken Music,” I highly recommend it. Beautifully done, an absorbing read about the musician’s childhood in Newcastle and his life leading up to the forming of the Police. I can’t wait for the next volume!