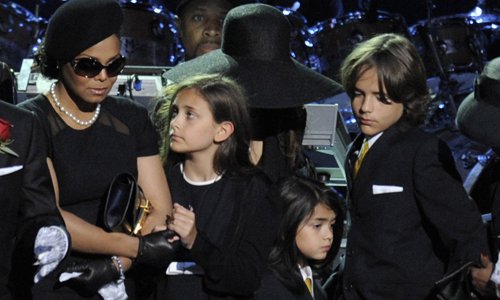 I got a kick out of the National Enquirer cover story this week. Janet Jackson’s ex mother in law says that Janet and her son, James, are the parents of Michael Jackson barnicle Omer Bhatti. I don’t know the mechanics of these things: does the Enquirer go to these people and pay them to make up stories? It’s all a lot of fun, I guess. Omer Bhatti, of course, has actual parents in Norway. Their names are Riz and Pia Bhatti.

I’ve written about this a lot over the years. When Omer was 12, they dressed him up a like a mini Michael and brought him to Tunis, where Michael was performing in 1996. Omer did a little moonwalking in the lobby and Michael invited him to his suite. He liked the kid so much that he added the Bhattis to his tour. Then Riz and Pia went to work for him at Neverland.

Over the years, Omer stayed at Neverland even after his parents returned to Norway. When he joined them at home, Omer became a Michael Jackson imitator and made money from it. He let people think he was Michael’s kid. Jackson liked to tell intimates that Omer was his secret illegitimate son; none of it was true. It was just Michael’s fantasy and it was sad.

As far as Janet Jackson goes, I do feel bad for her. For years a persistent rumor circulated that she had a secret child that been raised by her sister, Rebbie. Now it’s this thing. Janet has no children, and I’m sure it’s frustrating to keep reading these crazy stories. Omer Bhatti quite likes it, though, because it perpetuates his connection to Michael Jackson.