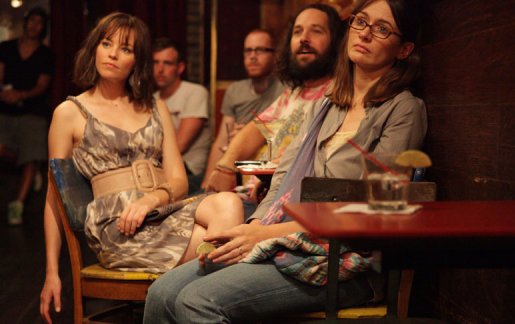 Steve Coogan may play a philandering jerk in “Our Idiot Brother” with Paul Rudd, but when ex former, er, adventurer Courtney Love appeared at last night’s New York premiere, the British actor split fast. And no wonder: we were all on a roof of a big new shiny apartment tower on West 42nd St. where the movie was screened outdoors after cocktails.

Coogan, who has a reputation for wildness, was pretty sedate before the screening. When he was introduced to the legendary Leslie Caron, Coogan almost bowed. But later, when he crossed paths with Courtney, he simply growled under his breath and made a hasty exit. The two have a not so happy past, something to do with lawsuits.

The rest of the “Idiot” who made it to the lofty premiere had an easier time, including Paul Rudd–who plays the sweet natured “idiot” brother of Zooey Deschanel, Elizabeth Banks, and Emily Mortimer–and Hugh Dancy, who’s become an “overnight sensation” with a bunch of big signings lately. Dancy plays the artful lover of Deschanel’s lesbian character. (She’s partnered with Rashida Jones.)

My favorite guest in this weirdly eclectic group: Kirsten Dunst. She sort of appeared, blew off the red carpet and photogs, and took a stroll on the roof during cocktails. I don’t think anyone knew she was there except for producer Meryl Poster, who chatted her up for a bit. Kirsten starts shooting a new film this week. But she’s going to cause a sensation when people see her soon in Lars von Trier’s “Melancholia.” She won Best Actress in Cannes for her performance. But last night, she just blended into the crowd.