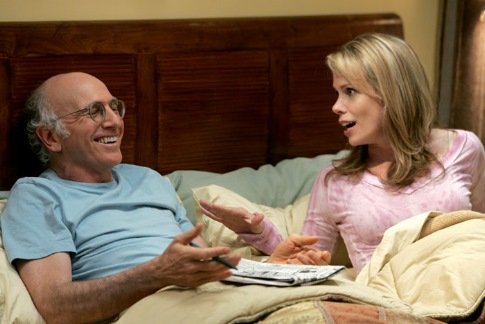 I just went through the first six episodes of HBO’s “Curb Your Enthusiasm” and realized something: Cheryl, Larry’s now ex wife, has only been in Episode 1, “The Divorce.” (This one involves girl scout cookies, among other things, hilariously.) I miss her! . It looks like the imdb.com was wrong: no Cheryl tonight and maybe not again.

Nevertheless: the episode was excellent, as good as the third one of the season, “Palestinian Chicken,”  which was beyond sublime. Not only did Larry and Rosie O’Donnell fight over Amy Landecker, but the added baseball satire of “juicing” and using Viagra was perfect. Plus, David Canary made a cameo appearance.

There have been great moments this season–I loved Larry’s accidental hero act on the plane to New York, for example. And Michael McKean is terrific as the director who winds up forcing Larry to go to New York for three months–Larry is avoiding doing a charity gig for him. J.B. Smoove is a welcome respite to all of Larry, Jeff and Susie’s mishegos. He made a triumphal arrival in New York; Next week Wanda Sykes returns.

But no Cheryl. Sniff! I guess that ship has sailed.