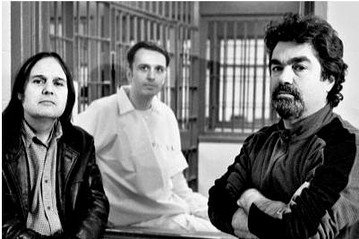 The big news yesterday out of Little Rock, Arkansas was that the so called West Memphis 3 were finally released from jail. Award winning documentary filmmakers Joe Berlinger and Bruce Sinofsky have been on the case since 1996 when his first film about this wrongly accused trio, called “Paradise Lost,” was shown on HBO and won a lot of awards. Berlinger followed it up with a sequel in 2000, and is now readying the third and final part of the saga for the Toronto Film Festival, Oscar consideration, and many HBO showings.

Berlinger tells me a couple of things: one–that the new “Paradise Lost” will premiere in Toronto without the three exonerated* defendants because of passports issues. But he expects that when the film comes to the New York Film Festival later in September, Damien Echols, Jessie Lloyd Misskelley, and Jason Baldwin will be on hand. New York should roll out the red carpet for these guys.

Why an *? Because instead of just granting them amnesty or admitting that the state was wrong, Arkansas forced these men to plead guilty while asserting their innocence under an arcane law. Since Echols was on death row, Baldin and Misskelly reluctantly went along with the deal to keep their buddy from the electric chair. In other words, they were strong armed. Word to the wise: stay out of Arkansas if at all possible.

Berlinger didn’t think anything was happening this summer with the West Memphis 3 because a court hearing was scheduled for December. At that time it was expected that a new trial would be ordered to over turn the 1996 decisions. It’s all based on DNA testing that has proved none of the defendants were involved in the brutal slayings of three 8 year olds in 1993.

Berlinger says, ironically, that the lawyers have been fighting about the DNA for almost ten years. But now, with the hearing looming, he feels political motives forced the attorney general to try and get rid of the case. AG Dustin McDaniel is a rising star in Arkansas Republican circles and will likely run for governor in 2014. Berlinger thinks McDaniel didn’t want to chance the embarrassment of a retrial of the West Memphis 3 which the state would lose.

Meantime: while Berlinger was waiting for the court decisions in  Little Rock, the filmmaker went to Africa with Paul Simon and filmed a reunion show of all the “Graceland” musicians. The film may be ready to be shown at Sundance.

As for the West Memphis 3, I am told they are going to be low profile for a while. Celebrities like Eddie Vedder and Natalie Maines of the Dixie Chicks have plans to help them celebrate and re-enter life after nearly 20 years.