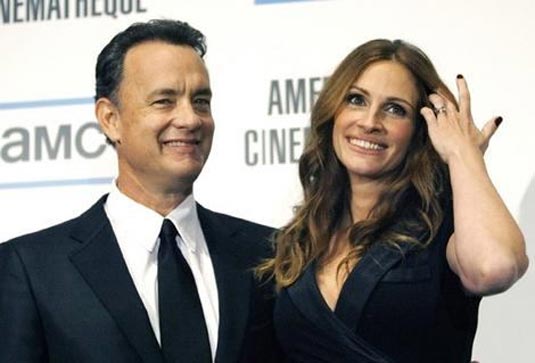 “Larry Crowne” is not a great film and it’s not exactly creating a stampede to the box office. On Friday night, Tom Hanks and Julia Roberts only mustered $4 mil at the box office. They’ll be lucky to have $16 mil in the till by Monday night. But it’s not all that bad. For one thing, “Larry Crowne” did better last night than the last Hanks-Roberts combo. “Charlie Wilson’s War” opened to less than $3 million in 2007 on its opening night. It went on to earn $66 million–which I am sure everyone at Universal, and Tom and Gary Goetzman at PlayTone would be thrilled with if it happened.

“Larry Crowne” cost $30 million to make (it looks it) plus probably $10 million for prints, ads, and promotion. It’s not like they took over Times Square or Red Square for opening nights. In the end it will break even. Hanks and Roberts didn’t take their usual paychecks for this, it’s a low budget film. Good reviews would have helped, but there aren’t many. Still, if adults want to see a film this weekend or this month, aside from “Midnight in Paris,” this slow moving comedy is their best bet. (Unless, of course, you can find “Beginners” in your town.)

Tom Hanks will be back later this year with Sandra Bullock in Stephen Daldry‘s “Extremely Loud and Incredibly Close”– which will be a very strong Oscar contender from Scott Rudin with Warner Bros. and Paramount. So we won’t worry about him.  Julia Roberts won’t be seen again until 2012 in brilliant casting as the Evil Queen in “Snow White.” But Roberts has other things to worry about. Two movies she’s produced still have no distributor. “Jesus Henry Christ” is recent. “Fireflies in the Garden” has never appeared in the  U.S. Hanks, however, is a superstar producer, especially for HBO, from “Band of Brothers” and “The Pacific” to the upcoming “Game Change.”