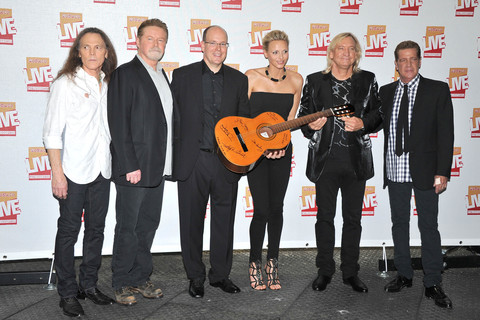 Life in the fast lane: Here’s the picture sent out officially from the Monaco royal wedding of The Eagles with Prince Albert and his now bride Charlene Wittstock. You’ll notice Don Henley and Glenn Frey, who cowrote most of the Eagles hits but now rarely speak to each other, flanking the royal couple. (I love the sideways look on Timothy B. Schmidt‘s face, he’s on the far left. Get me the f outta here.)  Thank god for Prince Albert. He and his new wife have kept an international incident from occurring. Already they’re helping the world. And yes, the Eagles did play (or are playing) for the royal couple and their guests, but not for free, my dears. Legendary rock acts command $1 million and up for private gigs, and this would seem to be the top one of the season. All year long many of our favorite musicians are setting up in backyards (the ten to twenty acre kind) for billionaires, royals, and such, and collecting very, very good fees. It’s a refreshing change from doing arenas where the green room is concrete and the food is, too. How many other acts don’t speak to each other, but communicate through assistants, roadies, and the like? More than you can imagine.

Our old pal Dana Kennedy has a complete report about the wedding itself today at www.people.com.