David Geffen is a busy man. He’s obviously too busy to watch an entire play. Last night he left the revival of “Born Yesterday” at the intermission. Geffen, accompanied by a handsome young man, tore out of the theater at the break, jumped into a highly polished large new black Mercedes with a female driver at the wheel, and sped off into the night. Maybe he didn’t like the snacks. He couldn’t not have enjoyed the performances of Nina Arianda, Robert Sean Leonard, and Jim Belushi. The whole cast is top notch, and Arianda steals the show as Billie Dawn, the part originated by Judy Holliday and then made fresh again by Madeline Kahn. 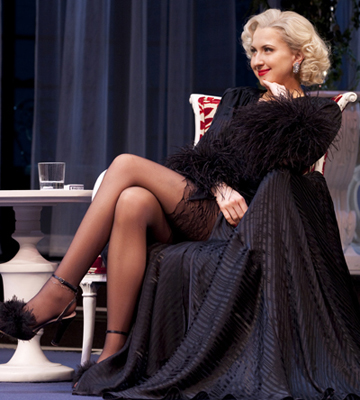 This edition of “Born Yesterday,” directed by Doug Hughes and with a gorgeous set by John Lee Beatty. The show may close soon–business is so-so and dependent on half price ticket sales. A better press push and some advertising might help. It would be great if audiences started flocking to the Cort Theater to see great –and funny — work done. The play, of course, was written by the legendary Garson Kanin. David Geffen may have left, but actor Stephen Spinella-– of “Angels in America” fame–was sitting right next to us, and loved it. What’s not to love? See Nina Arianda now, so you can one day say, I say Nina Arianda in “Born Yesterday.”

PS At least Geffen stayed until the intermission. Barbara Walters walked out of “Spider Man” a half hour into its first act on Tuesday night. Is this a trend?