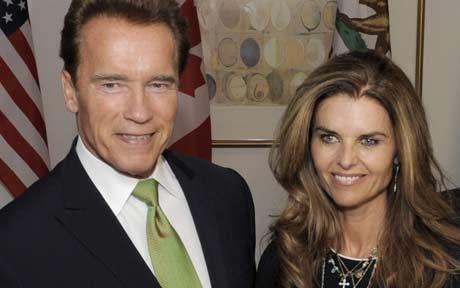 Arnold Schwarzenegger has admitted to fathering a child with a woman other than his now estranged wife, Maria Shriver. The story is in the Los Angeles Times today. They’ve been working on it for years, too. The terrible part of it is that the child is now 10 years old, and that Arnold kept the lie this whole time.

But not completely: in 2003, the Times, Matt Drudge, and the National Enquirer were all reporting this story. A woman named Tammy Baker Tousignant is named all over the internet as a former flight attendant who had Arnold’s baby. She was not his only extranarital affair. In the late 90s, Premiere magazine named two other women– actress Rachel Ticotin and a long time affair with a woman named Gigi Goyette.

In 2005, the LA Times and the Washington Post reported that the Enquirer’s owner, David Pecker, a friend of Schwarzeneggger, had paid Goyette to keep her mouth shut about their 20 year fling so he could run for governor. Stories about Schwarzenegger’s affairs, the illegitimate child, and groping of women have been in the press for years.

It’s not like Maria Shriver didn’t know what was going on. The question is why she put up with it for so long, and why she kept her mouth shut while Arnold became of the governor of California. The sitting governor, Gray Davis, was ousted and humiliated–all for this.

I’m sorry to say that the Kennedys’ history of sex and lies continues into this generation almost completely. They used to call it the Kennedy curse. But maybe it’s just genetics. Some families have a legacy of large ears, or freckles. The Kennedys’ whole story is now about forsaking personal integrity in order to retain political power.

In her 2000 book, “Ten Things I Wish I’d Known Before I Went Out in the World.” Shriver writes: “to my wonderfully unique husband, Arnold. I thank you for the most fascinating adventure a gal could sign on for. If I’d known what a work out it was going to be, I wouldhave gotten in better shape way back when.”