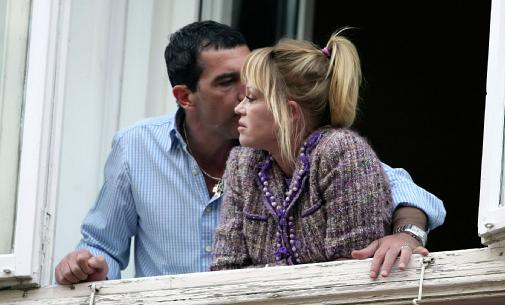 Saturday in Cannes: Melanie Griffith and Antonio Banderas celebrated their 15th anniversary by going to the really famous Bacon restaurant in Antibes. Antonio bought Melanie stunning jewelry–earrings, a ring, and a necklace that Melanie told us aboard Russian billionaire (and Weinstein Company investor) Len Blavatnik‘s yacht, the Odessa, would have been “too much” for an informal lunch. Antonio’s gift was a cross made of black diamonds that he showed off to guests like Naomi Campbell, Jessica Chastain, Jane Fonda, Ron Burkle, and “Dark Knight” producer Charles Roven.

Antonio, who’s got Pedro Almodovar‘s “The Skin I Live In” premiering here on Thursday, joked: “They said when we got married we wouldn’t last three months. But we knew they were wrong.” Indeed, the Hollywood couple are stronger than ever and having a ball. Antonio has turned into a producer and director. I can tell you exclusively that he’s getting ready to produce a series pilot for Melanie called “Neurasthenia.”

The Banderases took in the “Pirates” premiere before heading to Bacon, and later met up with Robert DeNiro and Grace Hightower, Jane Fonda and Richard Perry, at the Hotel DuCap’s famous lobby bar well after midnight–where they all bumped into the “Pirates” gang–Johnny Depp, director Rob Marshall, and actor Ian McShane who were toasting their much cheered opening night.

DeNiro, by the way, is having a great time as head of the jury. When I asked him how it was going, he gave me a huge grin and put his index finger to his closed mouth. “Shhhh, we can’t say a word!” he joked.

As for Melanie and Antonio: I don’t know what the tabloids do to doctor pictures of Melanie. But I can tell you that she is absolutely gorgeous, and looks more like a movie star than ever. Antonio is a lucky guy!