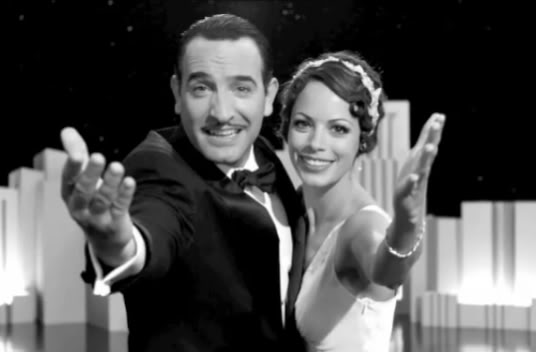 “The Artist,” a silent comedy shot in rich black and white, is the unexpected hit of the Cannes Film Festival. Michel Hazanvicius’s spectacular take on the transition from the silent film era to talkies is brilliant, fresh and altogether original. The film got a wildly rousing ten minute standing ovation at its premiere tonight. The cast includes American actors John Goodman, Penelope Ann Miller and Joel Murray. But the revelations are the lead actor and actress who are French, and a talented Jack Russell terrier. Watch for The Artist, distributed by Harvey Weinstein, to be a major part of the next awards season. And strangely enough it has — by chance — two elements to watch for that made it perfect for Weinstein to buy: a reference fo “Inglourious Basterds” and another to “The King’s Speech.” Talk about prescient. The film was shot by French filmmakers in Los Angeles, by the way. And the main actors–Berenice Bejo and Jean Dujardin–took six months of tap dance lessons to be in the film. Wait til you see them!