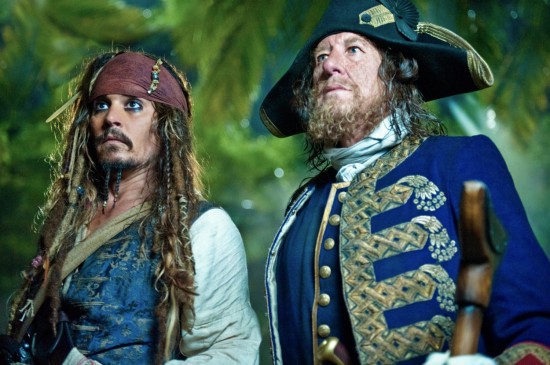 Captain Jack Sparrow is back, and this time he’s looking for the Fountain of Youth. “Pirates of the Caribbean: On Stranger Tides” premieres tonight at the 2011 Cannes Film Festival with stars Johnny Depp, Penelope Cruz, and Ian McShane on hand. Geoffrey Rush, of course, is featured front and center in the latest installment of the “Pirates” series, and Keith Richards–uncredited–returns as Sparrow’s father albeit ever so briefly. It’s hard to evaluate a “Pirates” movie at this point.

At the premiere tonight: the cast, plus Jane Fonda, Melanie Griffith and Antonio Banderas, and all the celebs who aren’t attending the Tribeca Film Festival’s Cannes screening and dinner.

You know it will be a blockbuster; the whole thing is sort of beyond criticism. And unlike “Harry Potter,” we’re not working toward a conclusion. At today’s press conference, Depp threatened many more episodes. Knowing that there’s already a script for Number 5, and that Cruz has probably signed on for Number 6, too. what can you do but sit back and relax and enjoy? It’s not like this is torture, although the Hans Zimmer score is so loud and lively that you may want to wear earplugs.

The plot this time is indeed the search for the Fountain of Youth. There’s a lot of swordplay along the way, and some feisty chit chat between Depp and Cruz–they’re a good pair. Penelope is a good match for Depp. Ian McShane is a formidable Blackbeard. And there’s loads of special effects, plenty of CGI to satisfy the kids. This is summer blockbuster big studio fare, nicely polished and laminated in a very pleasant package.