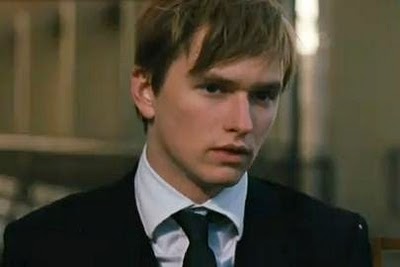 The legendary actor, director and artist Dennis Hopper got to see his 20 year old son, Henry, make his film debut. Henry told me last night that Dennis was able to watch a rough cut of him in Gus van Sant’s “Restless” before he died last year. Dennis could only have been proud of Henry, who really is made into a star in van Sant’s film, which premiered last night in Cannes. “Restless” is sort of like “Harold and Maude” meets “Love Story.”

For van Sant, it’s a real indie love story that will connect strongly with young people, I think. Mia Wasoskowska, of “Kids Are All Right” fame, is a knockout. Schuyler Fisk, daughter of Sissy Spacek, is terrific. But thanks to van Sant, Henry Hopper’s first film ever is a star turn. The blonde, blue eyed young man resembles closely his father Dennis and his mom, actress Katherine La Nasa, who proudly accompanied Henry to the “Restless” premiere.

So what next? Henry tells me that he’s done some art installation work on pieces curated by James Franco. Like Franco, he’s also into art and into exploring all aspects of entertainment. “It took him a month to agree to make this film,” his manager, Ilene Feldman, told me last night. “He may never do anything again, or take off like a rocket. It’s all up to him.”

“Restless” will be launched this fall from the Toronto Film Festival.

PS “Restless” is produced by Bryce Dallas Howard, following in the footsteps of her father,Ron Howard. She did a great job. More on Bryce later today….