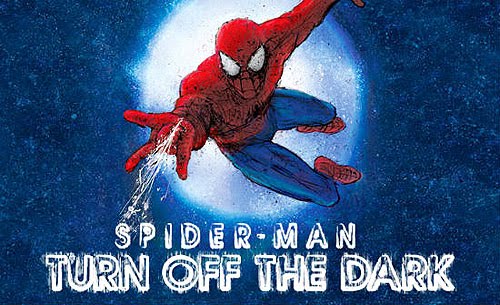 “Spider Man: Turn off the Dark” returns to Broadway next Thursday, May 12th after a three week break. It still hasn’t opened officially and won’t until June 14th. Still, the “reviews” will come on Thursday of the “new” version of Julie Taymor’s show.

What will be different? There are said to be three new songs from Bono and The Edge. Gone completely are the “dancing shoes.” Much diminished is the role of Arachne, the fabled “Spider woman” character. Also gone are the Geek chorus. The whole Act 2 battle among six other villains is completely changed, I am told.  And: “There’re more of a romance between Peter and Mary Jane,” a source tells me.

Expanded: Patrick Page’s role as the Green Goblin. Page was the standout performer from Spider Man I.

But much of “Turn off the Dark” is the same, just rearranged. It’s still Julie Taymor”s show, with her concepts, costumes, puppets, characters. The new songs, I am told, are still at the piano stage and haven’t been fully played. So far they sound “eh,” says a backstager. And the new choreographer, Chase Brock? “He’s not very good,” my source–who is impartial–reports. The entire production is scrambling to make the new advertised dates for preview and opening, however.

Bottom line: “It’s never not going to be Julie Taymor’s show. The question,” says my source, “is whether reviewers will see it as different or just more of the same.”