I always had a deep and abiding affection for Jackie Cooper, not for his early career as a child star in “Our Gang” comedies–but for two sort of terrible but great TV shows he did in the late 50s and early 60s–“The People’s Choice” and “Hennessey.” (Don’t get excited; they were in reruns when I saw them!)

In the former, Cooper had a basset hound named Cleo who talked to the audience. Her ears went up when she heard something exciting. In the latter, Abby Dalton was his love interest. She was my first TV crush, I think. Of course, Jackie Cooper went on to do lots 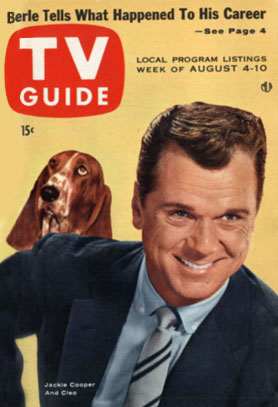 of great stuff. He was an an accomplished TV director. He starred in four “Superman” movies with Chris Reeve as Perry White, the crusty editor of the Daily Planet. Cooper has dozens of TV credits as an actor, including a memorable turn on “St. Elsewhere.” He did it all, with grace and talent. Jackie Cooper died on Wednesday at age 88. RIP.