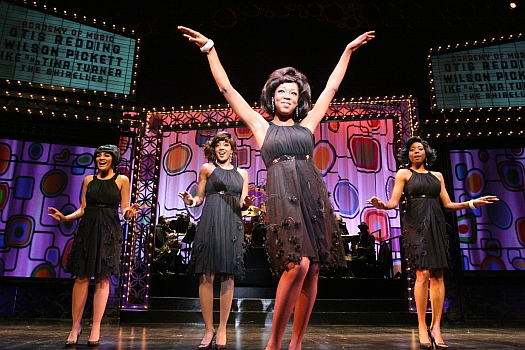 I’ve been watching director and creator Floyd Mutrux put together his musical, “Baby It’s You,” for a few years now in Los Angeles. The story of Florence Greenberg, who created Scepter Records in the 1960s, and her hit group, The Shirelles, finally opened on Broadway last night. The show got middling reviews, but it’s a crowd pleaser. For fans of late doo wop, girl groups, and early R&B pop, the show is a singalong hit. Beth Leavel, playing Florence, a New Jersey housewife who was a pioneer in rock, is sensational.

The Shirelles had lots of hits, as did Dionne Warwick, on Scepter. But you won’t be hearing their biggest hit, “Will You Still Love Me Tomorrow?” Carole King, hoping to do her own musical one day, refused to grant permission. It’s a tribute to the show that you don’t miss that song. Burt Bacharach and Hal David gave permission for their songs, so the title number becomes the centerpiece.

Famed record producer Richard Perry handled the show’s music and sound, and is recording the score album right now. (It will be released next month.) Perry was accompanied to the premiere by Jane Fonda and by Clive Davis, for whom Perry makes all those best selling Rod Stewart albums. Lots of folks from the record biz turned up, too, including Barry Weiss, now the head of DefJam Records. Mutrux was also thrilled to see friends from LA, Valerie Harper and Tony Cacciotti, plus producers Fred Rappoport and Judy Gordon.

PS You may have heard that the Shirelles, Warwick and Chuck Jackson are suing the producers over use of their likenesses. They used the opening day to get publicity–even thought they’ve known about the show for at least four years, waited through all its performances in different Los Angeles area theaters without saying a word. I’m told they all turned down chances to be at the opening night, too.