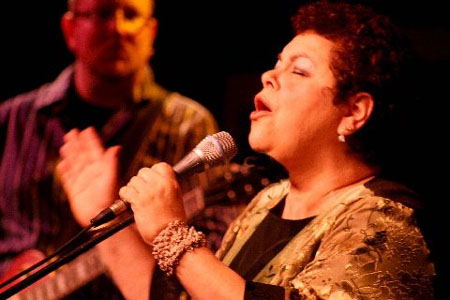 I do think that Phoebe Snow, who I first met in the early 80s, would be gobsmacked by all the attention she’s received since news of her death broke earlier today. In real life, Phoebe had enormous struggles with her career. She did have a very devoted following, though. When I produced shows for her at the Cutting Room in 2002, fans drove long distances, some even flew, to hear her gorgeous voice. We were constantly amazed. Unfortunately, as with many older acts, packed clubs didn’t always translate into CD sales.

In the fall of 2001, I convinced Phoebe it was time to make a new record; it had been quite a while since her last. After spending a great afternoon with Nile Rodgers and friends like Patti Labelle and Diana Ross recording a charity version of “We Are Family,” Phoebe agreed to try again. We spent weeks going through shoe boxes she’d squirreled away in her Fort Lee apartment, looking for cassettes of songs she’d written but never recorded.

The songs were amazing, too. “I’m Your Girl,” “Sahara,” “The Other Girlfriend,” were just these gems that Phoebe had attempted and abandoned on demos. We scooped them up and brought them to my friend Bryan Lurie’s studio, and transferred them all to CD. This was all during the winter of 2002. One of the shows at the Cutting Room took place in early May. My friend, Bob Salpeter, a talented graphic designer, did the beautiful posters. Garland Jeffreys came and rooted for Phoebe from the audience. Among the musicians who played on those gigs were Mike Mancini, who’d played with Bruce Springsteen and Jon Herrington, from Steely Dan. Phoebe had always had a close relationship with both Bruce, and with Donald Fagen of Steely Dan and his wife, Libby Titus.

A huge– I mean, huge–floral display arrived, personally sent by Bruce Springsteen and Patti Scialfa. A few months earlier, in mid October 2001, Phoebe had performed at a memorable show at the Count Basie Theater in Red Bank, New Jersey. It was for families of the firefighters who were killed in the World Trade Center disaster. The show was organized by the E Street Band’s Garry Tallent, and featured Bruce and Patti, Jon Bon Jovi, Felix Cavaliere (an old friend of Phoebe), among others. Phoebe rocked the house that night, as she always did, and left a lasting impression. In other words, she stole the show.A few weeks later, at Christmas, she joined Sam Moore on stage at B.B. King’s for “Rudolf the Red Nosed Reindeer” and blew every one away.

The Cutting Room shows would ultimately turn into albums, but not for many years. Later that summer, with the help of music lawyer Fred Davis, we secured a deal for a live album and a studio album from Bob Frank at Koch Records. But in August 2002, Phoebe got cold feet at the contract signing, and backed out. She wound up recording the albums exactly as we planned them, but not for about five years, and for a label–Eagle Vision–that had previously rejected her.

PS Somewhere in there I took Phoebe to meet Wyclef Jean at his studio on the West Side of Manhattan. They hit it off right away, and Wyclef even laid down some tracks for Phoebe to “vibe” to. I wish I still had those CDs. The project never came together, but it wasn’t for lack of trying, And Wyclef was a mensch. He “got” Phoebe from the minute he met her. A couple of other things: this was also a time when Phoebe didn’t want to be thought of as a jazz or R&B singer. She was in love with the rock group Staind. Go figure.

Track to download: Phoebe’s version of “At Last,” from the New York Rock And Soul Revue’s Live at the Beacon CD. It’s on amazon.com’s MP3 service. As good as, if not better, than Etta James. http://tinyurl.com/4xkpxoy