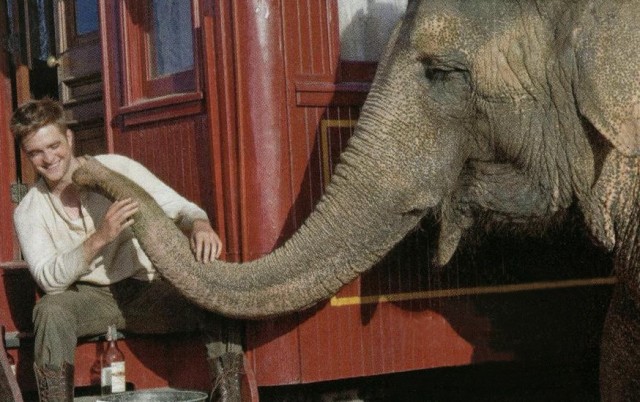 “Water for Elephants” opens today, with “Twilight” star Robert Pattinson in the lead role. The big question this Easter weekend will be, Can Pattinson overcome the movie’s horrendous reviews to be a hit? Or is Pattinson a vampire with bite in only one series of films? On Rotten Tomatoes.com, “Elephants” is scoring a 45% right now, not good and not terrible. But the negative reviews are scathing. The New York Times’s Stephen Holden, who is usually generous, skewered the actor and the film.

Holden writes: “Mr. Pattinson is only partly to blame for the fatuity of a character who even in the novel is really a generic male ingénue with no personality. In the film there is nothing about him to suggest a Depression-era youth whose parents’ deaths have thrown him into the world without a safety net. He is more like a “Gossip Girl”-ready 21st-century heartthrob who has exhausted his trust fund.” He gives the film itself low marks.

Oddly enough, Pattinson is supposed to be paired up with Reese Witherspoon in “Elephants” as a love interest. It was a just a few years ago that she played his mother in “Vanity Fair.” Time flies! (In real life she’s only eight years his senior.) “Elephants” has a pretty good shot this weekend, with competition from Morgan Spurlock’s wonderfully entertaining “POM Wonderful Presents The Greatest Movie Ever Sold” and a new Tyler Perry film–they’re interchangeable.

The power of the “Twilight” audience will endure a big test. Pattinson can’t even look to girlfriend Kristen Stewart for advice. Her non “Twilight” films have been busts pretty much–“The Runaways” and “Welcome to the Rileys”  bombed last year.