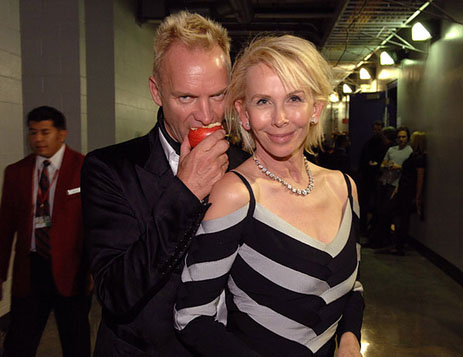 Big week for Sting and Trudie Styler: they were honored, along with Bill Clinton, Wednesday night by the Riverkeeper Foundation. On Tuesday night, Sting joined James Taylor, Bette Midler and other stars in an anniversary concert at Carnegie Hall. That should be enough, right?

Last night Sting joined Elton John at a private concert in the Waldorf Astoria Ballroom for the Breast Cancer Research Foundation. The show was so sold out, people were eating dinner in the corridors. The group raised over $4 million. The whole room — the ballroom was the most crowded I’ve ever seen it for a charity event–got a kick out of that including Ms. Styler herself who was sitting with Elton John, David Furnish, Ingrid Sischy, Sandi Brandt, Donna Karan, Evelyn and Leonard Lauder (who PS run this whole thing so well), and Dr. Larry Norton of Sloane Kettering Memorial.

Sir Elton, who had invited Sting, opened the show solo on piano magnificently with “Your Song,” “Tiny Dancer,” and “I Guess That’s Why They Call It the Blues.”

Styler, who’s used to this by now, blushed.

Sting sang three songs–“Englishman in New York,” “Fields of Gold,” “Desert Rose”–the latter with about two dozen of the best dressed women in New York faux belly-dancing with him.

Also on call for the splashy night: Paul Shaffer and wife Cathy, Matthew Settle and Kelly Rutherford from “Gossip Girl,” Deborah Norville, actress Abigail Breslin, who turned 15 last night and is growing up beautifully. Before the show I ran into the night’s emcee, Elizabeth Hurley, who I spoke to about her great friendship with former boyfriend, Hugh Grant. “We actually do live two houses away from each other,” she told me. “Hugh gets along very well with Damien,” her nine year old son, Hurley said. But Grant doesn’t babysit. “I don’t think he’s meant to be along with small children.” No–that’s just for comedies like “About a Boy.”

A great night–and Evelyn Lauder told two actual jokes from the stage to cover the change over from Elton to Sting. Finally she asked, “How much will you pay for me not to do another joke?” Funny!

Now Elton gets ready for his big April 20th show to kick off the Tribeca Film Festival. Trudie is developing a remake of “The Harder They Come,” with the daughter of the original director, and Sting continues writing songs for the Broadway adaptation of “The Soul Cages.” He also plays a fan club show at the Apollo Theater in two weeks. If I were you, I’d join that fan club now!