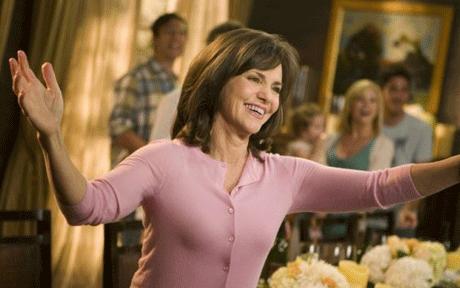 Does Sally Field know something we don’t? After years of speculation, she’s finally accepted the role of Mary Todd Lincoln in Steven Spielberg‘s film about the 16th president. Daniel Day Lewis will star as Honest Abe.

It’s a major role, and not one that can be performed without focus and attendance for a two time Oscar winner. Yet, Sally is the star of ABC’s “Brothers & Sisters,” a once great soapy series now slowly dissolving before our eyes. “Lincoln” shoots this fall, right in the middle of the next TV season. Sally wouldn’t be able to do both jobs unless she can ask James Cameron for an avatar. So what gives? Insiders say she has no knowledge about the renewal of “Brothers & Sisters.” But the show, after watching an episode last week, has run its course.

More or less gone are several cast members including Calista Flockhart, Balthazar Getty, Emily van Camp and Patricia Wettig. The show has also lost its main storyline–the Walker family owned Ojai Foods, a produce distributor, and a vineyard. There was also the ongoing saga of secrets discovered in the Walker family when their patriarch suddenly died.

All of that is history. The episode I watched the other day, about the family’s grandmother dying, was so awful I wondered if anyone had actually written it or if the actors were just given an improv. In a strange way, “B&S” was just a long mini series, with one main idea that really resolved itself a while ago. It’s time to pull the plug. I think ABC knows it, and Sally Field–a true showbiz survivor–probably senses it, too.