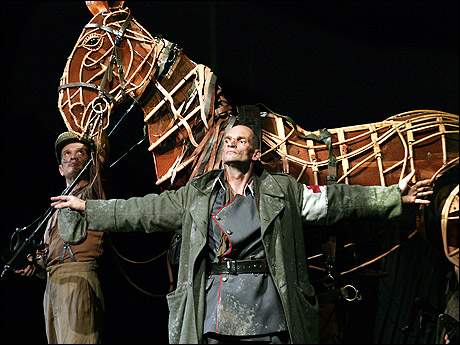 Michael Morpurgo‘s “War Horse” comes to Broadway tonight so highly marketed that the hype is almost scarier than World War I. A monster hit in London, and a movie to be released directed by Steven Spielberg, “War Horse” has numerous YouTube videos and other materials ready to shock and awe us. Some of it is correct, and some of it is not.

At Lincoln Center’s Vivian Beaumont Theater, “War Horse” is a stunning spectacle, a theatrical experience like nothing else. It is very Cirque du Soleil. I can’t remember a play I’ve seen with a full musical score, singers, special effects in sound and lighting that just knock you out. If no one ever spoke in “War Horse” you’d get the message: war is hell. Animals are our friends.

And there are the horses. The Handspring Puppet Company is the Mummenshanz of 2011. They bring these wild horses to life in a way no one’s ever seen on stage or in film. You see, “War Horse” is the story of Timmy and Lassie, or rather, Albert and Joey. It’s the beginning of WWI in Britain. Albert has trained Joey, a semi-racehorse, brought him up on his parents’ poor farm. But then war beckons, and Joey is drafted into service. Soon, Albert follows, determined to bring Joey home. Through the horse’s eyes we see the grim horrors of the war in France.

While Albert, who is just a teen, goes on his adventure, Joey is ultimately rescued by a German soldier who recognizes he’s not just an average horse. This buys Albert time to find Joey, because as the war dwindles down the horse is in poor health. On top of that, Albert is temporarily blinded.

Aside from the visual and audio, some terrific performances by Peter Hermann as the German soldier, Seth Numrich as Albert, Alyssa Bresnahan as Albert’s mum, and Boris McGiver as his sad Dad. The 35 member ensemble is excellent. But nothing prepares you for the beauty of the horses, or how the Handspring Company makes them come to life. It’s extraordinary.

However: The Tony Award goes to the Best Play, not the best theatrical attraction, so I wonder what will happen with “War Horse.” The play is very simple, and nearly as textured or wrought as “Good People.” It may not matter; “War Horse” is galloping toward us even as we speak. Somehow, it has to win all the awards just to satisfy the sound and fury that’s preceded it.