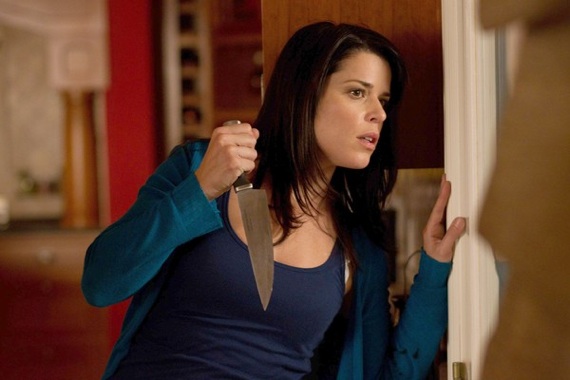 For a few years now there have been rumors that Courtney Love would exec produce a movie about Nirvana. Or at least her life with Kurt Cobain. I saw Courtney last night at Mr. H’s, the lounge in the Soho Mondrian Hotel. She missed the screening of the surprisingly smart satire, “Scream 4,” but made the party.

And another surprise: Courtney looked great. She’s in good shape, fixing up a townhouse in the West Village, making videos underwritten by Prada, and acting a little more serene than usual. Good for her.

I introduced Courtney to “Gossip Girl” star Matthew Settle, and later we wound up chatting with Meryl Streep’s two successful acting daughters, Mamie Gummer and Grace Gummer. Meantime, Curtis Jackson aka 50 Cent, strolled through–he’d hosted the screening at the Crosby Street Hotel with “Scream” star David Arquette, who was also in the room and looking as dapper as Fitty. Harvey Weinstein was pleased that “Scream 4” went over so well. (It’s a lot of fun.) “Precious” star Gabby Sidibe held court in the back room.

But back to Courtney: she tells me that the Nirvana film is still a live project, and she still hopes that James McAvoy and Scarlett Johansson will play Kurt and Courtney. David Benioff has a script Courtney likes, apparently. Who will direct and will produce remain the big topics for discussion. I know I want to see this movie!

As for “Scream 4,” it is a scream. Wes Craven and Kevin Williamson went back to the original, and recaptured the wit and satire. Arquette, wife (?) Courtney Cox and Neve Campbell are all back and just fine. Adam Brody has a cameo as a cop, Marley Shelton is very funny also in nitwitted police force, and Hayden Panetierre and Emma Roberts are standouts as are Mary McDonnell, Rory Culkin, and Anthony Andersen. (It’s a well cast film for a horror spoof.)