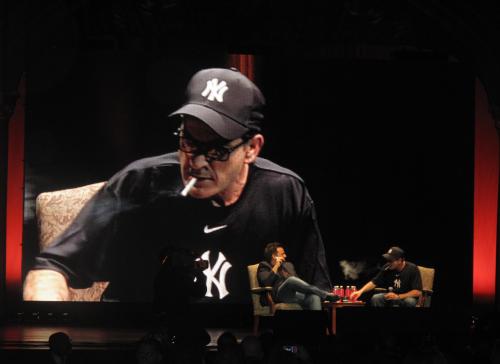 Charlie Sheen’s Boston show? A bust, by all accounts. The Boston Globe headline: “On Stage, Charlie Sheen Has Nothing to Say.” People left in droves, after Twittering during show that they’d gotten cheap tickets on StubHub. Some said it was “boring.” Pauly D from “Jersey Shore” showed up. After he left, Charlie–according to audience members– said “I don’t watch his show.” Otherwise, it was more of the same: trolls, warlocks, and Charlie begging for his job back on “Two and A Half Men.”

Here’s the countdown: end of tour is May 3rd. CBS will announce fall schedule ten days later or thereabouts. Last year the announcement came on May 19th. Sheen still has 14 more shows, ending in Seattle. (There’s no Los Angeles stop, they’re keeping him out of CBS and Warner Bros.’ backyard.) Sheen will have little time to hurry back home, and somehow recant everything he’s said and done, apologize profusely to Les Moonves and Warner Bros. and maybe even Chuck Lorre.

In the meantime: Last night’s best story comes from Rich Shertenlieb, a local sports radio guy, who got Charlie to come on his radio show after the debacle. But before the show, Rich Tweeted that he bought a pair of regular priced tickets in the second row a half hour before the show. He also Tweeted that a security guard told him he could bring a few friends up front with him.

The audience booed, according to reports, or just yawned. Everyone is “over” Charlie Sheen. He is the motherf**cker with the hat. How can continuing this be anything but a big negative for Charlie or the audience? And the show is far from sold out. During the day, Charlie’s Tweet master sends out messages offering free tickets to the show. Yikes.