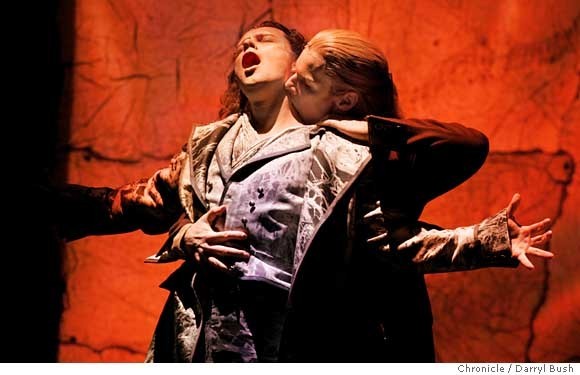 Elton John has been getting might testy lately. First he went after Billy Joel for his drinking. Then on Saturday Night Live he took a poke at his “Lion King” collaborator Julie Taymor and her “Spider Man: Turn off the Dark.”  He sang a funny parody with the line “Can you smell a bomb tonight?” to the famous “Lion King” song he wrote.

But Elton has a short memory. Far worse and a bigger bomb than “Spider Man” was his 2006 musical, “Lestat.” Based on “Interview with the Vampire,” this staggeringly awful stinker played 33 previews and 6 actual performances before being shut down–its coffin nailed down tightly. To this day I cannot think of a show this bad. It was beyond. During the intermission of the previews performance I saw, literally everyone left. I had to buy a friend a drink to make him stay with me so I could review the show.

While “Spider Man” is at least filling seats and taking in around $1.3 mil a week–sometimes more–“Lestat” lost its total investment and was put away, never to be heard from again. The show may have flushed as much as $12 million down the drain. And like “Spider Man” there were last minute changes, and lots of nasty gossip. Unlike “Spider Man,” it did not have an overriding vision or framework that could sustain changes.

To wit: “I guess that’s why they called it a flop.”