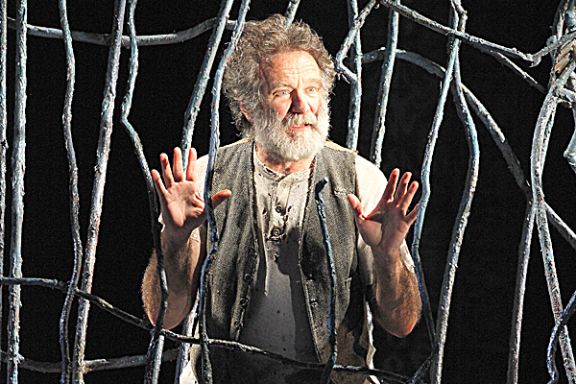 Robin Williams has a stunning hit on Broadway: he’s the star and main character in “Bengal Tiger in the Baghdad Zoo.” He opened Thursday night to rave reviews and thunderous applause from friends like Billy and Janice Crystal, Sting and Trudie Styler, Bob Balaban and Lynn Grossman, Peter Asher and wife Wendy, Barry Levinson and wife Diana, Susan Sarandon, Neil Simon and Elaine Joyce and dozens of wowed theatergoers who didn’t know what to expect including The New Yorker’s veteran writer, Lillian Ross. Moises Kaufman directed this experimental and cool new play by Rajhiv Joseph, and it’s a thing of beauty. “Bengal Tiger” takes place in 2003 in Bahgdad, in a zoo, as American soliders are searching in vain for weapons of mass destruction.

Most of the characters including Robin’s, are ghosts. But Robin is also a tiger. And very very funny while the play delivers multiple images and layers with anti-war statement. At the party afterwards, Billy Crystal could not stop kvelling, And it was a big deal for him, too. “I missed opening day at Yankee Stadium,” he conceded. “But I know you have to stay up late for Broadway!” Williams was overwhelmed, I think. When someone told him the review in the New York Times was a rave, he said: “I guess that will be good for business.” An understatement. The Tony Award nominations for Best Actor in a Play are going to be wild this year, with Williams facing off against at least Al Pacino, Brian Cox, and a bunch more big names on their way!