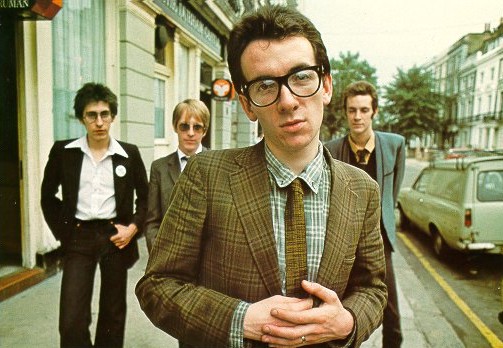 Tonight, Elvis Costello goes back 32 years and plays a club show  on April Fools Day in New York. He’s supposed to be on stage at the Gramercy Park Theater at 11pm. This is very much what he did in 1979.

If you were in New York City in 1979, you’ll recall it was a great year for music. For the whole year, as an experiment, WPIX FM played New Wave hits mixed with R&B classics 24 hours a day. It was like a dream. The Clash, The Temptations, The Jam, Sam & Dave, Elvis Costello, and so on. There was no rap, no processed American cheese pop. There was no Auto Tune. Disco was very popular: “I Will Survive” was number 1. In New York, New Wave/Power Pop, which had started in the US with the Ramones, then bounced to London, was back and bigger than ever.

On April 1st, Elvis Costello and the Attractions, promoting their third US release, called “Armed Forces,” announced three shows in one night. They would start at the Lone Star Roadhouse on Fifth Avenue and 13th St., where a giant iguana was perched on the roof. Then he’d go to the Bottom Line on West 4th St. and wind up at Great Gildersleeve’s on the Bowery. All three clubs are gone now, thanks to greedy landlords and NYU.

I went to the Bottom Line show. It was spring time weather, almost warm. No rain, snow, sleet or freezing cold temperatures. What I remember most is getting a spot by the stage, and that Joe Jackson–who was really big right then with “Look Sharp,” came in and stood nearby.  The set was a frenzy of hits from Costello’s three albums and the place was packed. I had my colored vinyl copy of “Armed Forces,” also known as “Emotional Fascism.” When the show was over, I remember getting a collectible single–either “My Funny Valentine” or the EP “Live at Hollywood High.” In 1979, this was extremely exciting.

Can 32 years have really passed? Most of New York’s key clubs are gone, pop and rock have nearly disappeared, no one ever came along to succeed the New Wave generation. Music was corporatized–oh it’s too depressing! Maybe Elvis will reproduce the set list from 1979–“Riot Act,” “What’s So Funny,” “Watching the Detectives.” How about “American Squirm”? It’s going to be a great night–if I can just stay awake!