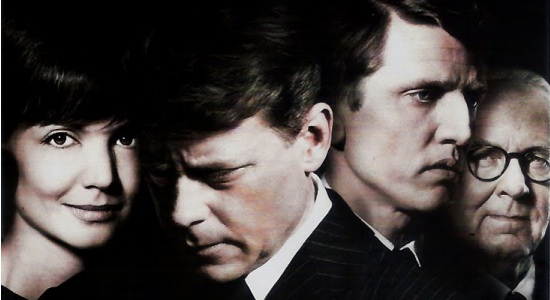 “The Kennedys” premieres in Los Angeles tonight. I’ve heard the press is not invited. Really, it doesn’t matter. I’ve made it through five of the eight episodes. They are truly awful. Watching this thing is torture, although the music is nice.

It’s not the politics. The shows are just badly made. Greg Kinnear, who’s usually very good, does the best he can. By episode 3 he just gives up trying to maintain the Boston accent. (Now you know why Melissa Leo and Christian Bale got Oscars; it’s not easy to do.) Katie Holmes can’t do it either. As Jackie she sounds like a female Elmer Fudd. She also looks mystified most of the time.

The real stars of this show are Barry Pepper as Bobby, and Tom Wilkinson as Jock Ewing, er, Joe Kennedy senior. “The Kennedys” is written like a short season of “Dallas” with Jock and Miss Ellie as Joe and Rose, JR Ewing as Jack Kennedy, Bobby Ewing as Bobby Kennedy, and Sue Ellen as Jackie. (Maybe Pam is Ethel.)I love it when the announcer says at the start of each episode, “Previously on The

The mini series is very concerned about Jack’s philandering, that he and Jackie both are amped up on Dr. Feelgood’s shots, that Bobby is a choir boy, and Joe Senior is a crusty curmudgeon. They are always discussing their sex lives. The basis for the mini series seems to be a weaving together of all the trashiest books ever written on the Kennedys. C. David Heymann, Kitty Kelly, the whole gang. You wonder why the History Channel didn’t want it? I’m sure in Episode 1 when Jack Kennedy is riffling through his medicine cabinet, someone at History said, “Whoa!”

There are weird omissions and additions: Teddy Kennedy is completely absent. I don’t think he’s ever mentioned. Also missing is Kathleen “Kick” Kennedy, who was played so well by Tracy Pollan in a better TV movie years ago. But shooting fish in a barrel, the series makes a long detour into the story of Rosemary Kennedy, who was lobotomized.

I don’t know if Caroline Kennedy or Maria Shriver had a role in History dropping the show. But if they did, they were right. In the 50th anniversary year of President Kennedy’s election, this miniseries is no tribute. I’m not advocating whitewashing, but a well made, historically accurate show would have been preferable.

If I can force myself through volumes 6 through 8, I’ll update you.