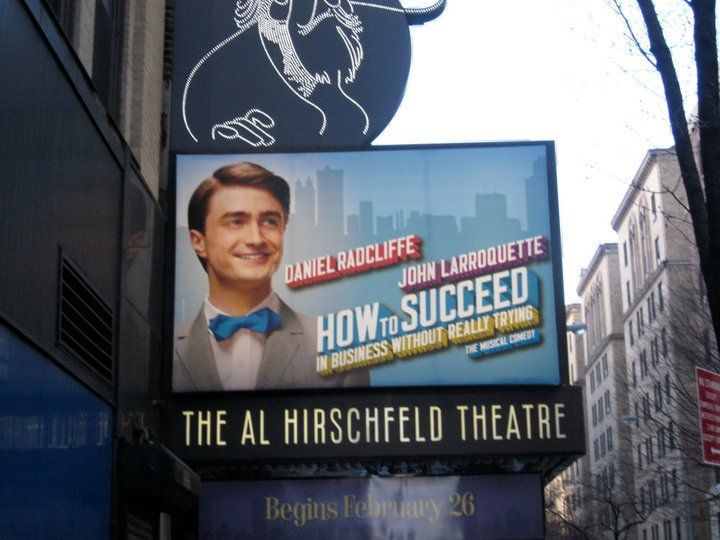 I do think the New York Times’s Ben Brantley has lost his mind. He loved (to an embarrassment) the rather underwhelming “Book of Mormon.” He didn’t like last night’s revival of “How to Succeed in Business Without Really Trying.” He called the former sweet and kicked the latter in the shins. Of course the former carries a theme song called “F–k God,” has not one song you will remember when the show is done, and features one unmoving set. Sweet? That’s “How to Succeed,” which was like a breath of fresh air last night: great songs, great dancing, real laughs, and a terrific cast.

Daniel Radcliffe — in his musical debut after appearing in the drama, “Equus”–is the surprise of the night. He’s no chorus boy, Ben. He’s right on the money, singing and dancing with gusto. He has a perfectly fine voice, and his dancing is more than competent. He’s also keeping up with Frank Loesser’s songs, standards like “I Believe in You,” “Rosemary,” and “Brotherhood of Man.” I could not be more impressed. Radcliffe has an excellent supporting cast, too: John Laroquette, newcomer Rose Hemingway (who this column first announced a year ago would be in this show), Rob Bartlett, Michael Park, Ellen Harvey, and Tammy Blanchard–on her way to a Tony nomination as Hedy LaRue.

In the audience was Michele Lee, who played Rosemary, the female lead, on Broadway in the original run and in the movie; Marlo Thomas and Phil Donahue, Bernadette Peters, Garry Marshall, Liza Minnelli, David Hyde Pierce, John Stamos, Angelica Huston, Adam Duritz of Counting Crows, Clifton Collins Jr. (“The Event,” “Capote”), Neil Simon and wife Elaine Joyce, NBC chief Bob Greenblatt, former CBS exec Fred Rappoport, and producer Candy Spelling, who told me she’s been at dozens of rehearsals and previews since signing on to the project in 2009.

Folks, ignore Ben Brantley. He doesn’t know what he’s talking about. “How to Succeed” is effervescent, ebullient, and highly enjoyable. Run to the Al Hirschfeld Theater and see “How to Succeed” as soon as you can.

PS Swellegant after party at the Plaza Hotel. Classy.