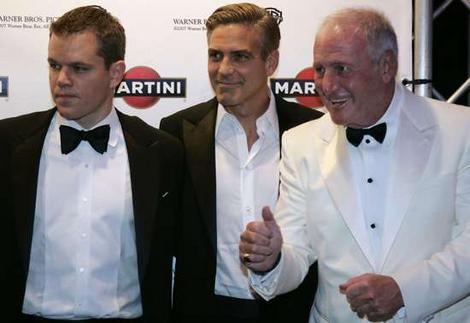 Tuesday night: our Leah Sydney caught the A list Paramount studios in Hollywood as they watched the new HBO documentary about famed producer Jerry Weintraub, one of our favorite people. and the producer–among other things– of all the “Ocean’s” movies..   Doug McGrath‘s “My Way,” produced by Graydon Carter, premieres on Monday April 4th at 9 pm. So who came? Charlie Sheen’s ex publicist Stan Rosenfield huddled with CBS’s Les Moonves and Julie Chen, Ron Meyer chatted with Sylvester Stallone (the only actor trailed by a publicist), plus Matt Damon , Lee Majors, Billy and Janice Crystal, the indefatigable Carl Reiner, Bruce Willis, James Caan— on a cane with his actor son Scott Caan, Brett Ratner, Curb Your Enthusiasm’s Jeff Garlin, Chelsea Handler, Ellen Barkin, Andy Garcia.

Jerry told the crowd: “I don’t take long to make a speech…cause I need a vodka really badly. Hope you have fun.  I’ve had fun, I’ve seen it 117 times.”

Director Doug McGrath told us that it wasn’t so much Jerry’s famed career that attracted him to it but rather his unorthodox living arrangement: Weintraub’s still happily married to his wife Jane Morgan, with whom he has four children, and he’s also happily been living with his girlfriend Suzie Ekins for the past twenty years.

“What interested me, obviously he’s been a successful promoter and producer, but there are a number of people who have pulled that off in their lives. But I don’t know anyone who has a wife and a girlfriend,  who know each other, who are happy with each other and are happy with the arrangement. That made me think who is this guy that can make that happen?  There are a lot of people who could make ‘Karate Kid’ and a rock concert happen, but I don’t know anybody, and I mean anybody that can keep a beautiful, articulate wife like Jane, and a wonderful woman Susie and keep them both happy.  Totally, that’s what pulled me in.”

Jerry later told us his secret to success.   “I never hear the word ‘no’.  Ever.  And I just absolutely love life, better here than underground.”

By the way, the whole story of Jerry’s life, his wife (singer Jane Morgan), etc can be found in his terrific read of a book, called “When I Stop Talking, You’ll Know I’m Dead.”