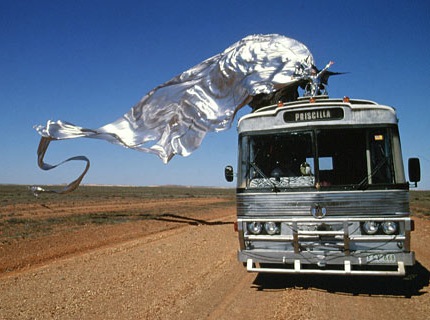 Sunday night will bring the opening night of the musical version of the Australian film, “Priscilla, Queen of the Desert.” Because I’m in Washington on Sunday night, I caught Saturday night’s show. It’s vulgar and coarse, with retread teeth gritting disco songs for a score. The audience loved it. Of course, the audience was largely gay and/or female.

The movie is more like the famed disco flick, “Can’t Stop the Music,” than the film on which it is actually based. If it weren’t for Will Swenson and Tony Sheldon I would have abandoned all hope, but they were great. Also there are some beautiful girls in the chorus who are actually of the feminine persuasion. This brassy, Vegas like spectacle can be witty, but the vulgarities are unnecessary. No Tonys here, except maybe for costumes. There are life dancing whiskbrooms in this show! And gigantic whirling cupcakes for “MacArthur Park.” The character sport Elton John‘s cast off outfits circa 1976.

The sets themselves–aside from Priscilla, the bus–looked cheap. The show is doing good business in previews, but it’s going to be hard getting husbands and boyfriends into this theater without some major compromise at home. (Lots of Poker nights are in the offing.) Why is Australia — home of “The Boy from Oz” also–so interested in drag queens? Is it because they have a city named Sydney?

If you’re into it, “Priscilla” is a jukebox of songs by Cyndi Lauper, Madonna, Donna Summer, Gloria Gaynor, and other divas. There’s also, inexplicably, an opera number performed in drag atop the bus.

Meanwhile: “Rebecca,” the world famous Daphne DuMaurier novel, is coming to Broadway as a musical. Once an Alfred Hitchcock movie, “Rebecca” with all her dark secrets and melodrama, seems like a grand idea for the “Les Miz” and “Phantom” set. On Friday, an invited audience of Broadway elite got to see a special concert presentation of “Rebecca.” It won’t come to Broadway until next year some time, but from the looks of things it’s very polished and continues being tweaked. I can’t actually review a show on this basis, but I will tell you that Carolee Carmello, from “The Addams Family,” was stunning as spooky caretaker of Manderley, the famed estate from “Rebecca.” If this makes it to Broadway in 2012, Carmello will head straight to raves and a Tony nomination. She’s that good. So nice to know that next year’s shows are already shaping up!