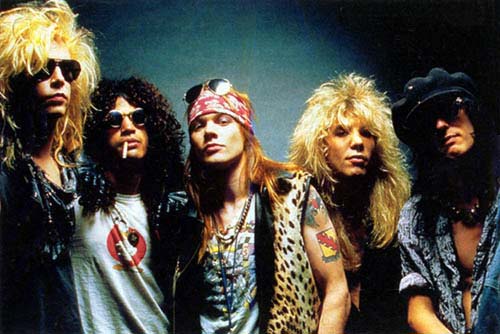 Who’s next for the dreadful selection process of the Rock and Roll Hall of Fame? The nominating committee– consisting mostly of people who either work for Jann Wenner now or worked for him eons ago–meets in the summer. But their choices are thinning out. The only group or act entering the eligibility for the first time is Guns N Roses. Look for Wenner to move heaven and earth to reunite Slash and Axl Rose and make sure they get in tout suite.

But just to show you how bad music got 25 years ago, here are some other names they could consider: Crowded House, Babyface, Bruce Hornsby, Salt n Pepa, Eric B Rakim, Lyle Lovett, and Matthew Sweet. And those are the cream of the crop. The low end is Bobby Brown, Samantha Fox, New Kids on the Block, and Roxette. Yes, 1986 was a very, very bad year and just the beginning. The following year gets worse, with Public Enemy the only name group.

So what to do? Wenner and his people are in a jam now, forced to retrieve names from the past whom they’ve snubbed. Of course, they do have Sting, who should have gone in this year. Bon Jovi is looking better and better. So is Cyndi Lauper. Beyond that trio, there are all the names we’ve mentioned recently. You can see the whole layout at www.futurerocklegends.com. I’d go for Chubby Checker, Carly Simon, Chicago, Rufus and Carla Thomas, Kiss, Lou Reed, and Neil Sedaka in addition to the three I’ve already mentioned. And if Wenner is upset there are no good names from 2011 and 2012– 1986 and 1987–he can blame himself. That was about the time Rolling Stone completely turned into a press release for rhe junk record companies churned out for MTV. By then the real Rolling Stone was way down deep where the bugs all creep.