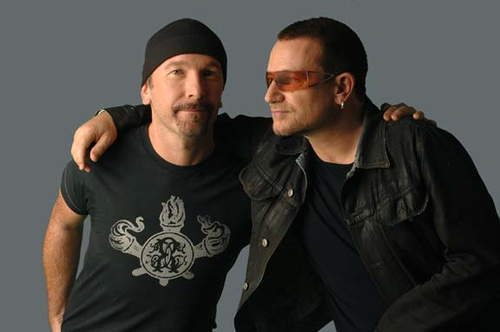 It’s hard to be international rock stars. You barely have time to clean your sunglasses. In the case of Bono and The Edge, they committed to “Spider Man: Turn off the Dark” a long time ago. But U2, their busy rock group, tours constantly. Last fall, when “Spider Man” was heading into previews, the songwriters of the show were in Australia. They missed most of the brouhaha and returned to bad reviews. Unfortunately, the songwriters of a musical have to be on the premises when a show is trying out.

Now, after nullifying Julie Taymor and agreeing to shut “Spider Man” down for three weeks, Bono and The Edge have a new problem. They’re leaving again in nine (9) days to tour with U2. They play Santiago, Chile on March 25th, commencing a South American tour that doesn’t bring them back until April 13th. They could be in New York for the three weeks that “Spider Man” is down, but on May 11th — the day “Spider Man” is set to return, all fixed and ready to go–U2 starts a new round of shows in Mexico City.

Of course, there are four and five day breaks, so the songwriters could jet into New York. But their next break doesn’t come until June 7th–just a week before the newest announced “Spider Man” opening night on June 14th. It’s going to be tricky to supervise the show while performing for hundreds of thousands of fans. Hopefully by early June they’ll have found what they were looking for. So to speak.