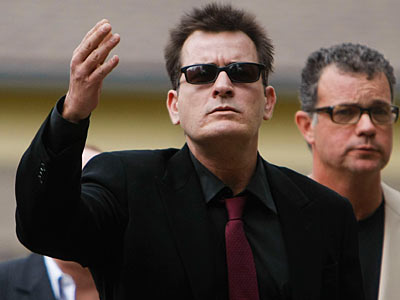 UPDATE: Charlie Sheen tweets: “the LAPD were AWESOME. Absolute pros! they can protect and serve this Warlock anytime!!! c”  Earlier Thursday evening: Reports from various news sources in Los Angeles say that Charlie Sheen’s house has been raided by the LAPD. The police department says they’re looking for firearms. They may be looking for unlicensed weapons. Sheen’s Tweet master Bob Maron has sent out a message: “all good here on homefront. all reports false. I’ll explain more very soon.” This may have to do with custody. Earlier today Sheen struck a custody deal with ex wife Brooke Mueller over their kids. Meanwhile, in other Sheen news: he announced one man shows in Chicago and Detroit. He also patted himself on the back for his last UStream broadcast. More to come…Just another night in Hollywood!