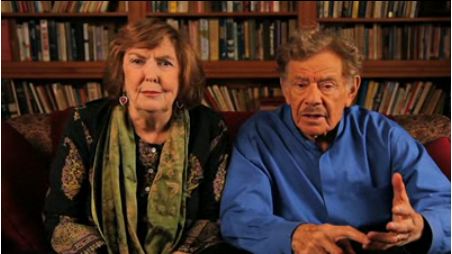 So we shlepped out to the Museum of the Moving Image in Queens last night for the only two people who could get us there: Jerry Stiller and Anne Meara. The New Yorker’s Ben Greenman served as moderator as Jerry and Anne reminisced free form, and hilariously, about their long career(s). There were clips of their early appearances on “The Ed Sullivan Show” and from Jerry’s classic “Seinfeld” shows as Frank Costanza, and from Anne’s numerous sitcom turns on “Rhoda” and “Archie Bunker’s Place.” I used to love Jerry and Anne’s radio commercials for Blue Nun when I was in high school. They are abnormally funny and still play off each other like a well rehearsed symphony of jokes.

Meara–whom Ed Sullivan mispronounced “Mara”– always throws in philosophical, funny observations. Realizing many of the people they were mentioning–like Rodney Dangerfield and Henry Morgan–were long gone, Meara said, “Life is a rental.” So true. Why didn’t they correct Sullivan on the pronunciation? “We were scared to death of him. He was like someone sent from the Vatican,” Jerry said. The show was only supposed be to an hour, ran at least ten minutes longer, and could have gone on all night. Most of it was about their tough tour circa 1963 of small cities after early success in Greenwich Village nightclubs. “We bombed everywhere, every night,” Jerry said, remembering how they dragged their kids, Ben and Amy, around the country.

“Cleveland,” Anne said. “Stay out. St. Louis, it was very hip then. It was the first time I heard someone say they were going back to their ‘pad.’ I thought it was a feminine thing.”