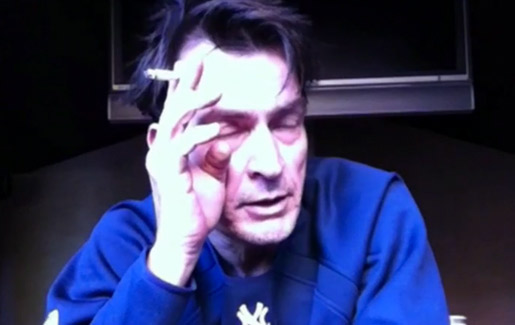 Now it’s like getting ready to watch a fresh train wreck. Charlie Sheen will return to UStream.tv tonight at 10PM eastern for yet another broadcast. After last night’s debacle, the only place to go is up. He just sent out a Tweet, his first in 24 hours, that reads: “The Warlock is hungry. Hungry for corporate flesh.” His attorney, Marty Singer, must be cringing. All of this, every word of it, will come back to haunt Charlie in court. I spoke to the people at UStream and they’re anticipating a massive audience since this is the last scheduled episode of “Sheen’s Korner.” And then what? One can only imagine. Some topics tonight: how Charlie would feel if his good friend Rob Lowe took over his spot on “Two and a Half Men.” And how he feels about taking down an entire hit TV series. Of course, there’s always the subject of his health. But we seem to be beyond that now.

PS Seems that Charlie’s phone number is now all over the web. Someone pulled it off one of his videos.