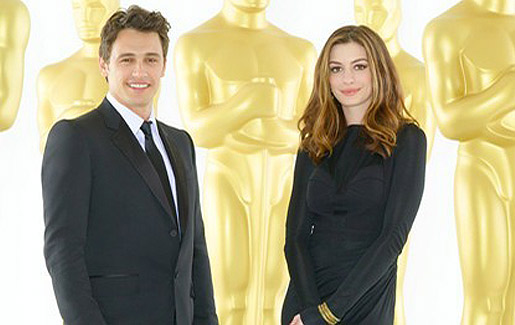 Where did James Franco go after the Oscars? Was he stoned during the show? Did he really participate in a sexy photo shoot with Lindsay Lohan? New York. And no, no, and no. As I wrote in an earlier post, Franco took the 10:40 flight from LA to NYC last night so he could write a paper and get back to school. He wound up missing all of the Oscar festivities. Remember, he did the c0-hosting gig as a favor to producer Bruce Cohen. So much for that. James told me he also is not doing a sexy photo book with Lindsay Lohan.

“Yeah, right,” Franco emailed me. “I’m also doing a sports book with Obama.” He was also not stoned during the show as Gawker insisted. When Franco smiles, especially into bright stage lights, he squints. He is a squinter. It’s absolutely bewildering how the media can make a jump from a movie role, as Franco’s was in “Pineapple Express,” and land it that he would actually be getting high before hosting the Oscars. This is a guy who doesn’t even drink. Unbelievable! One more thing: Franco will probably star in the Sam Raimi prequel to “The Wizard of Oz.” But I am advised that all the reports over the weekend are premature. There is no deal yet, and, my sources–not Franco–say it’s far from a done deal. “There is a lot to be worked out.”

I did think that Franco and especially Anne Hathaway did an exceptional job given its parameters. Frankly, the Academy simply refuses to give the public what it wants–a comedian. They want Billy Crystal. Indeed, I would suggest they secure Jimmy Fallon now for next year. But bringing in actors is always going to be a problem, especially people who have pre-existing schedules. They were lucky with Hathaway; she was free. Franco was busy with school and other projects. He made it work. They each deserve kudos.