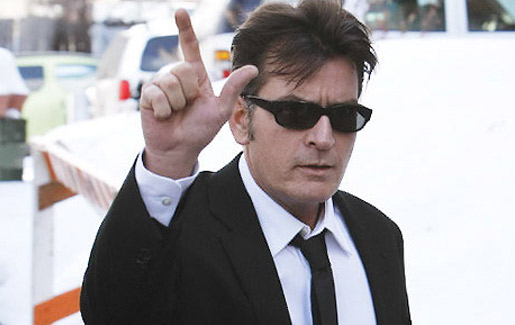 Stan Rosenfield, a beloved and honorable press agent, is quitting Charlie Sheen this morning. Rosenfield has worked for Sheen for eight years, masterfully guiding him through his divorces from both Denise Richards and Brooke Mueller. Stan –whose other clients include Robert DeNiro, George Clooney, and Kelsey Grammer–has also had to deal with Sheen’s public misbehavior over the years. But the last couple of weeks spelled the end of their relationship. Sheen has run wild, ignoring Rosenfield and booking TV and radio interviews without him. As I wrote last week. Stan–a new grandfather–was on a plane from LA to NY for Kelsey Grammer’s wedding when Sheen went ballistic and took on CBS. By the time the plane landed, “Two and a Half Men” was cancelled and Sheen was labeled an anti-Semite. Sheen can blast CBS, Chuck Lorre, and anyone else, by the way. But Hollywood knows and loves Rosenfield.

Meantime, Sheen’s public nervous breakdown continues. It hasn’t helped that plenty of people have decided to exploit him and enable him. ABC News, The Today Show, and of course, TMZ are complicit in the exploitation of this sad men with sunken eyes ranting incoherently. The Today Show interview with Jeff Rossen is particularly painful. The TMZ interview, conducted at Sheen’s fake baronial Hollywood palace, is a total embarrassment. And Sheen rants on and on about “violent love” and :”violent hate.” He’s advocating drug use, attacking AA, and creating a miserable legacy for his four small children and his adult daughter.

BTW, and this is funny: Rosenfield sent out a short statement about quitting. TMZ described as something sent just to them. It was sent to everyone. And Rosenfield didn’t quit because of the TMZ interview. He happened to text Sheen his resignation not knowing that the former TV star was doing his live interview.